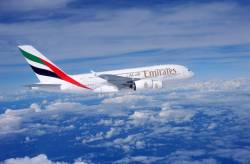 Emirates has relaunched flights to Baghdad, Iraq, after suspending operations in January of this year.

Emirates will operate with four weekly flights to Baghdad, served by an A330-200 aircraft in a three class configuration.

“Commercial air transport has been one of the cornerstones of economic development for Iraq and we want to continue to support the development of economic opportunities in Baghdad by increasing access to international markets and inward investment.”

Emirates services to Baghdad until October 23rd will depart as EK 941/942 on Monday and Thursday from Dubai and EK 943/944 will operate on Friday and Sunday.

The return flight, EK 942 will depart Baghdad International Airport at 10:40 arriving in Dubai at 14:00.

The return flight, EK 944 will depart Baghdad International Airport at 15:55 arriving in Dubai at 19:15.

Timings will change from October 25th, however, Emirates services to Baghdad will continue to depart as EK 941/942 on Monday and Thursday from Dubai and EK 943/944 will operate on Friday and Sunday.

Baghdad has been part of Emirates’ route network since 2011.

The airline operates four weekly services to Erbil and a double daily service to Basra.