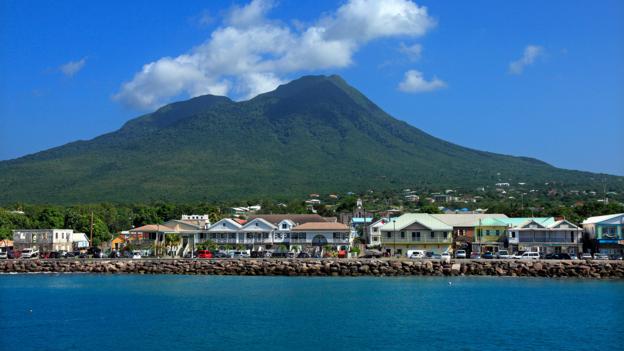 Nevis is less well-known than other Caribbean islands – and Nevisians prefer it that way. It’s only a few miles across the water from lively St Kitts. But here, the most cacophonous noise you’ll hear is the chirping of insects among the lush vegetation.

On the waterfront in Charlestown, the island’s laid-back capital, is a two-storey building with green window shutters and irregular brickwork. On the other side of a well-kept lawn is a brightly painted cafe, where shade and sea breezes offer respite from the energy-sapping heat. But what really draws the visitor’s attention is a plaque on the wall declaring that Alexander Hamilton, the US founding father who features on the country’s $10 bill, was born on this site in 1757.

Hamilton’s life story has become increasingly well known since it became the subject of the phenomenally successful hip-hop musical named after him. After spending his early childhood on Nevis, his family moved to St Croix (now part of the US Virgin Islands, but then under Danish rule) in 1765, where he effectively became an orphan after his father left the island and his mother died.

He gained work as a clerk, where his talents were recognised, and he received financial support from local businessmen to study in America. He enrolled at King’s College in New York City (now Columbia University), where he began legal studies, alongside writing political articles supporting the fast-developing revolution against British rule. In 1776, without having graduated, Hamilton became an artillery commander in the Continental Army that fought the British, and the next year, was appointed as aide-de-camp to general George Washington, a role he served in for four years. From 1789 to 1795, he served as Secretary of the Treasury in Washington’s cabinet.

Hamilton favoured strong central government (his enemies accused him of being a monarchist) and a modern industrial economy. Among his notable achievements were supporting the ratification of the US Constitution in essays known as the Federalist Papers, which are still used as a reference point by judges interpreting the constitution. He also established a national banking system. But the museum next to Hamilton House, as the building in Charlestown is known, is keen to point out smaller feats, even suggesting that he was responsible for the tradition of eating turkey on Thanksgiving.

Nevis is clearly proud of its link. But did Hamilton’s early experiences in this “forgotten spot”, as the musical calls it, leave their mark on him?

It’s hard to imagine now, but the island was a hub of commerce in the 18th Century; an important British colony covered with lucrative sugar plantations. These now lie in ruin, and their elegant colonial houses have been turned into boutique hotels. But at the time they were home to wealthy planters, whose slaves toiled in the fields outside.

When he was born, Hamilton’s parents were clinging onto this privileged class by their fingertips. His mother, Rachel Faucette, had inherited a small plantation as well as the Charlestown property – but she led a troubled life, including being imprisoned by her first husband for alleged adultery. His father, James Hamilton, was from a propertied Scottish family. He came to the Caribbean in search of wealth, but suffered a string of business failures.

Adding to the family’s stigma, Alexander and his brother were born out of wedlock (his parents never married because Rachel had not divorced her husband). In 1759, after Hamilton was born, her first husband obtained a divorce that allowed him, but not her, to remarry. Hamilton’s illegitimacy may have meant he was excluded from Christian schools. According to his son, John Church Hamilton, Alexander said he had been educated “at the school of a Jewess”, and fondly recalled reciting the 10 commandments in Hebrew when he was so small he had to stand next to her on a table.

There was certainly a sizeable Sephardic Jewish community on Nevis at the time. The island still has a Jewish cemetery just off Charlestown’s main street, where 19 mostly well-preserved graves are dotted around a small grassy enclosure, the oldest dating from 1679 (archaeological research suggests there were at least 40 more burials that no longer have tombstones). The rectangular slabs, lying horizontally, have weather-worn inscriptions in Hebrew, Spanish and Portuguese, and are scattered with small stones placed by visitors, in accordance with Jewish custom.

At one point it was thought that a building behind the Nevis Island Administration offices was a former synagogue. This has now been disproven. But by analysing land records, researcher Michelle Terrell has identified the site where the synagogue did use to stand. Close to the cemetery, it formed part of a Jewish quarter in a less desirable part of town. Was this the location of the school Hamilton attended?

Walking past the tin-roofed building that now stands there, I like the idea that Hamilton’s education began in this humble location. It ties in with the question of social status that runs through his life. His enemies would not let him forget his illegitimacy, for which he suffered what he called “humiliating criticism”. And it’s tempting to ask whether a sense of inferiority drove his determination to succeed. But alongside his ambition, Hamilton was sympathetic to less fortunate members of society, speaking out against slavery and joining the New York Manumission Society, which promoted the emancipation of slaves (even though he himself probably owned slaves).

There is more that we could speculate on. Can Hamilton’s pragmatic desire for national stability be traced back to his own unstable childhood? Did his skills for influencing and manoeuvring develop to help him survive as an orphan? Did his hot-headed streak, which eventually led to his death in a duel in 1804 in Weehawken, New Jersey, on a ledge overlooking the Hudson River, have its roots in the sometimes lawless world of the Caribbean colonies?

What is certain is that Hamilton is hard to pin down. Some see him as an unprincipled social climber, while others believe he’s the encapsulation of the American Dream. Historians even dispute the year he was born, with some saying it was 1755, not 1757. And there is also disagreement about the location. We know that the current Hamilton House is a restoration. But some think that he wasn’t born on that site at all.

Richard Lupinacci, who owns The Hermitage hotel, a wooden former plantation house near the site of Hamilton’s mother’s estate, said that he had heard a different story from descendants of old planter families.

“They said that he wasn’t born in Charlestown – he was born up here in the country in 1755,” he said. “He would have lived in both places.”

Sitting beneath the building’s white-beamed ceiling in a room furnished with dark varnished chairs and tables and a patterned Persian rug, the history enthusiast told me that Hamilton’s family would have been welcome at the Hermitage, whose owners at that time were in the “second tier” of Nevis society. But Hamilton was probably ashamed of his childhood. “[The Hamilton family] were not in the upper echelon of the society here. It was very class conscious. He felt embarrassed and a bit disgraced. He doesn’t talk about happy times,” Lupinacci said.

While Hamilton was keen not to dwell on his time in Nevis, it’s impossible not to wonder what effect it had on him. We may never know the full story. But there’s always the chance that there’s another twist.