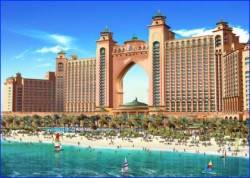 Kerzner International Holdings has announced that Alan Leibman will step down as chief executive, a position he has held since 2012.

Mohammed Al Shaibani, executive director of Investment Corporation of Dubai, and chairman of Kerzner International Holdings said: “On behalf of the Board and all my colleagues, I would like to express my thanks to Alan for his commitment and hard work, and our appreciation of his dynamic leadership and untiring management while at the helm at Kerzner.”

He added: “I wish him all the very best as he moves on to pursue his personal endeavours.”

Kerzner further announced that it has finalized the appointment of a new chief executive.

Details of the new appointment will be announced imminently.

In the interim, Al Shaibani will work closely with the executive team until the new chief executive is announced.

Leibman commented: “I am incredibly proud of all that has been accomplished at Kerzner International over the last 23 years.

“I am honoured to have worked with an amazing team that would always rise to meet every challenge, an incredibly supportive board of directors, and world-class partners.

“After 23 years,” he added, “I believe now is the ideal time to turn my attention to other challenges and fulfilling my personal passions.

“I am confident that the company will continue to flourish through creativity and innovation, delivering the best hospitality and entertainment experience and the highest levels of service in the industry.”