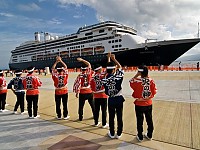 The Japanese government decided to develop a network of six specialized marine terminals for cruise ships. In recent years, the cruise tourism has become increasingly popular, especially among wealthy pensioners from developed countries.

According to official data, in 2016, nearly 2 million people visited Japan on cruise ships. This is 78.5% more than the year before. However, the island country, as it turned out, was not prepared for such a boom in cruise tourism and so many cruise passengers.

This year, the Japanese government decided to allocate extra funds from the state budget for additional equipment to handle the cruise ships. The equipment includes berths, comfortable passenger terminals, and other infrastructure.

The projects will be done in six ports – Yokohama and Shimizu on the main island of Honshu, Yashiro and Sasebo on the island of Kyushu and two more on Okinawa.

Giant shopping malls are also expected to be built in these places, mainly to attract Chinese visitors.

Japan is expecting a cruise tourism boom, which should reach its peak in 2020, when the Tokyo Summer Olympics will be held.