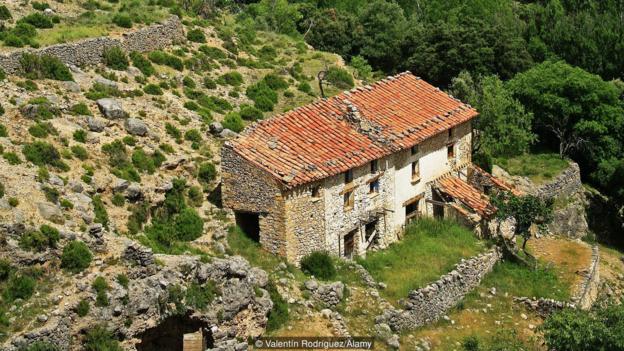 My heart was still racing half an hour after arriving. Visiting Sinforosa Sancho and Juan Martin Colomer – the last inhabitants of La Estrella, an abandoned mountain village in the Maestrazgo wilderness of Aragon, Spain – is not for the faint of heart.

My taxi driver Nacho assured me that he knew the way perfectly. ”My grandparents  come from a village nearby and I often spent summers there,” he said.

I should have known better. By the time we reached the village of Mosqueruela, some 15km from La Estrella, Nacho was lost and had to ask for directions.

The narrow dirt track got worse. Vertiginous precipices opened up right and left, rocks hit the bottom of the car and the GPS totally gave up. Nacho didn’t remember the odometer reading when we left Mosqueruela, and we could only guess how far we had come. But, we reasoned, a trail had to lead somewhere. We just hoped we’d end up in La Estrella, and not at the bottom of a ravine.

After a last steep drop on our right, I spotted a huddle of houses, some with their roofs caved in. A cupola covered with bright ceramic tiles sparkled in the sun.

“La Estrella,” Nacho announced proudly, as if he had known all along. With a sigh of relief, I got out of the car in search of the reclusive couple.

“You‘re a day late,” a voice rang out, followed by a wrinkled, beaming face peeping over a crumbling wall. For a moment, I was taken aback. They couldn’t have known I was coming, because there was no way of getting in touch with them to make an appointment.

Then it dawned on me. The previous day was the sole day of the year when the solitude of La Estrella was interrupted by pilgrims coming from Mosqueruela to worship at the sanctuary.

“Hello Sinforosa,“ I replied, because it could only be her. “I have come to visit you, and not for the romeria. I hope it’s not inconvenient and you can spare me a moment.”

Seconds later, her husband Colomer appeared by her side, holding a huge head of lettuce in his hand.

Followed by several dogs, cats and the odd chicken, we made our way along the uneven path to benches in front of the only building in good repair. “This is where we live,” Sancho said. “It’s owned by the church and we also look after the sanctuary.”

The story of the sanctuary – called Virgen de la Estrella, or Our Lady of the Star – is a mixture of legend and history. The tale goes that a shepherd walking in the dense pine forests was suddenly blinded by a brilliant light. When his vision cleared, he saw an apparition of the Virgin Mary sitting with baby Jesus in her left arm and holding a brilliant star in her right hand.

Back in the nearby village of Mosqueruela, he related his vision. People gathered quickly to see for themselves. Apparently, everyone saw the same image and it was decided to erect a chapel at the site of the apparition – in what is now La Estrella (The Star). It was soon replaced by a bigger church, consecrated in 1720, which to this day is the destination of an annual romeria (pilgrimage). On the last Sunday of May, the date of the apparition, the catholics of Mosqueruela trav”el 15km on foot to worship here.

Colomer brought out coffee, and immediately engaged in animated conversation with Nacho about agriculture, his grandparents’ village and sheep, while I turned to Sancho to hear their story.

“We were both born and raised in La Estrella,” she said. “At the time, this was a lively village: we had a school, two taverns, shops, a teacher, a priest, everything. We met at a dance in the  tavern and got married in the sanctuary. But then things deteriorated. Nobody could make a living from farming anymore; there were no jobs and people just left. It started in the 1950s, and by the ‘80s we were the only ones left.”

I had to ask the obvious question: “Why do you stay?”

Sancho turned her startlingly blue eyes on me. “It’s our home, our tierra. We have our house, our animals, our garden, our roots. We would never leave.”

“Don’t you get lonely, cut off from civilization?” I asked. Sancho laughed. “No, we have each other, and once a year the pilgrims come for a day. From time to time, visitors like you also drop by, if they can find the way.”

Sancho and Colomer have no TV, no telephone landline, no postman and, until very recently, no running water. Solar panels power their few lamps and a fridge. Laundry is still done the old fashioned way in a huge sink in the kitchen, and they cook in the fireplace. Entertainment is provided by a tiny transistor radio. They have just a single mobile phone – but there’s no reception unless they climb halfway up one of the surrounding mountains.

Once or twice a month, they fire up their ramshackle Land Rover and make their way to the village of Villafranca some 20km away to buy things they cannot grow or produce themselves.

“We are always happy when we are back home in our beautiful mountains, the fresh air and silence,” Sancho said.

When I asked Sancho what do they do all day, she gave me a pitiful look that only a born-and-bred country person can have for a city dweller.

“Don’t you know a woman’s work is never done?” she grinned. “I clean, cook, wash, feed the animals. We have chickens and rabbits, some sheep and a goat. I look after the sanctuary. I love to care for the Virgin Mary, bring her fresh flowers every day, dust and polish the church. Juan and I, we watch over her.”

Colomer joined in. “I tend the garden, the land and vegetables, and recently I’m trying my hand on the cultivation of truffles. They used to grow wild in the pine forests but are nearly depleted now.”

Our coffee finished, we wandered down to the sanctuary, topped by the cupola that we had seen from the trail. Sancho fetched a huge key and opened it up. Richly painted and decorated with fresh flowers, the sanctuary was much more beautiful than I’d imagined.

“I keep it in good shape,” she said. “Pity you missed the romeria. About 100 people came, celebrated mass, then we had a big meal all prepared in our kitchen. We all sat outside and then there was dancing and singing and plenty of good wine. The pilgrims brought it all with them.”

We went inside their house, where some of the rooms were furnished with simple iron beds and mattresses.

“For the pilgrims who can’t make it back the same day,” Colomer grinned, making the international sign for drinking. He also proudly showed me two showers and toilets, a recent improvement that came with running water.

“Will you regret it if your solitude comes to an end?” I asked him.

Colomer gave me a wistful smile. “Life as we love and live it, isn’t going to end anytime soon,” he replied. “Access to La Estrella is very difficult, there is nothing to do, no entertainment. We are in our 80s, just taking things one day at a time.”

It was an uplifting experience to have met two content and fulfilled people who prefer their more than 30 years of near isolation to the trappings of modern life.

If word spreads that the odd wanderer is welcome to stay, their hermit life may come to an end – but I get the impression that they will take everything the future holds in stride.