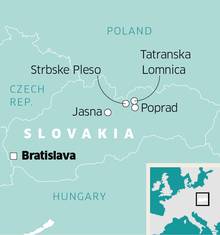 Surrounded by hunting trophies and enticed by the spicy scent of goulash, I make a dash for a lunch table in the cosy slope-side restaurant of Chata Zahradky. “Nie!” snaps a woman. “Nyet!” another responds, in Russian. When this sparks further argument with an adjacent table of well-fed Slavs, I slip back to my sheep-skin covered bar stool to watch the floor show unfold. With an entry price of just €1.20 per beer, this is not a battle of wills over an overpriced Meribel restaurant bill, it’s the Sturm und Drang of eastern Europe at its best. No subtitles required.

I’m in Slovakia to discover the Tatras, the highest range in the Carpathian mountains, a beautifully bijou 50km-long wedge of granite and limestone that forms a natural border with Poland to the north. With 25 peaks above 2,500m, and several ski centres to sample, if not pronounce – namely Jasna, Strbske Pleso and Tatranska Lomnica – Slovakia is an affordable slope-off for relaxed intermediates, families not obsessed with clocking up vertical, and those looking for a change.

Wizz Air began flying to Poprad from Luton in October. With a flight time of around two hours and a 15- to 30-minute transfer at the other end, the slopes of Slovakia are now much closer than Bulgaria’s. British skiers and tour operators have yet to catch on. Indeed, a quick scan reveals nary an Irish pub or strip club in sight. At hotels and most restaurants English is spoken, and the crisp winter air is pleasingly rife with the guttural sound of Czech, Polish, Russian, Hungarian and Ukranian, the travellers whose BMWs and Audis dominate pot-holed car parks.

Lunches and libations are seriously cheap and agreeably tasty, despite nearly everything I eat at Chata Zahradky being white. Sheep’s cottage cheese (bryndza), is combined with potatoes and bacon in a gnocchi-like concoction called bryndzove halusky. Classic pirohy dumplings served with sheep’s cheese are a staple (€3.90 for a large plate), with a glass of wine (€1.40). You’ll likely want a shot of fiery slivovica (€1.20) if plumping for the fried bovine thyroid or bullish gland with spicy cream sauce, both tempting, if only for the price (€3.90).

Before heading back out to the slopes, I take a shot of juniper-based borovicka. “We call it revenge of the forest,” says my Mountain Paradise guide, Filip, an engaging Harry Potter-spectacled font of knowledge.

On the road to Jasna, the country’s largest ski area, Filip points out the iconic High Tatras peak, Krivan (“the crooked”), the 2,450m star of the Slovak euro coin. As the mountains spike above the near horizon, we travel through a Grimm fairy tale of rolling farmland. These days, the fiercely territorial Slovak sheep dogs are common, defending their territory against some 600 bears, as many lynx, and 20 wolf packs that roam here.

After lunch, from the comfort of Jasna’s sleek, multimillion-euro gondola, I lean back into the black padded seat and behold the view. The gondola opened in 2009, and rises through a forest of cedar pines to just above 2,000m atop Chopok peak. Around 40km of pistes trace both the north and south faces.

Of course, 40km of slopes is relatively small, but the pitches are varied, snow is plentiful, and there is not a queue in sight. “This is skiing on a human scale, not like the factories of the French Alps,” says Gabriel, a visiting Frenchman I meet on the chairlift. Married to a Hungarian and living in Paris, he rarely bothers with his home-country slopes any more.

After a morning of uninterrupted cruising the north side’s linked blue and red runs through snow-covered forests, and doing laps on another, which takes an impressive 20 minutes top-to-bottom at full throttle, I head for the south side. Alighting from Chopok gondola, the view should be fabulous, but a thick cloud has settled, so my ski buddy and I remain in constant voice contact, inching down until we reach the tree line, where visibility is restored. After a brave lap through one of Jasna’s five ungroomed free-ride zones, we’ve earned a pit stop.

Inside the peak-top Von Roll Restaurant, the original wheels and cogs of Jasna’s first lifts – the Swiss-built Von Roll Seilbahn, erected in 1949 – have been reclaimed and incorporated into the design. It lends a chic authenticity to the experience. The menu is not only affordable (home-made pizza is €9, while beer is €2.20) but provides an amusing historical perspective on East-Bloc engineering: “No larger reconstruction done on the technological mechanism during whole 43 years, besides ordinary maintenance.”

My next destination is Strbske Pleso, a resort an hour away in the High Tatras. En route, I make a worthwhile stop at the Unesco-protected medieval village of Skanzen Pribylina, taking a walk through the 15th-century streets and touring a stolid Gothic church. I stand for a moment in the village shackles and dance with ghosts of Austro-Hungarian crime and punishment.

No better place to celebrate being sprung from jail than the Kempinski. The stylish superstar of architecturally varied Strbske Pleso, this is a chance to indulge in five-star luxury while paying mid-range chalet prices.

With a few dozen pistes between them, Strbske Pleso and the adjacent ski area, Tatranska Lomnica, are not going to get you into any navigational quandaries but they will keep beginners and young families entertained; a few hours on skis or boards are easily complemented by cross-country trails, a snowshoe walk, and romantic meal at wood-turreted Koliba Patria at the edge of the frozen lake, or hot chocolate in the hut atop 2,634m Lomnicky peak. It seems that while Slovaks have been skiing in the Tatras for more than a century, the rest of us have been missing out.

Mountain Paradise (0161 408 8988; mountainparadise.co.uk) offers a range of ski packages in the Tatra Mountains. A three-night stay at the Grand Kempinski Hotel, Strbske Pleso, costs £699pp from 8 January to 22 March 2015, including flights, a three-day ski pass, equipment rental, and access to the spa and wellness centre.