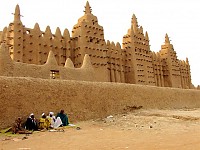 Mali tourism reported significant drop in the amount of visitors due to last year’s terrorist attacks. The number of European tourists coming to Mali decreased from 71,000 in 2014 to 36,000 in 2015, after the Radisson Blu Bamako attacks in November and the attacks on a hotel in Sévaré in August 2015.

The tourism numbers have plummeted in Mali thanks to serious security problems. Usually the busiest months of the year with respect to Mali tourism, January and February this year are far from prosperous. For several weeks in Bamako, restaurants and hotels haven’t had a glimpse of a tourist. Since the terrorist attacks at the Radisson Hotel in Bamako last November, cancellations are rife.

These results and the sector’s income go hand in hand. “In 2014, the sector's total revenue reached 50 billion CFA francs (about € 76.2 million) and investments reached 4.65 billion CFA francs, but this year, because of the terrorist attacks, we have estimated around 40 billion CFA francs in revenue,” says Moussa Dembélé, who is in charge of assembling Mali tourism and hotel statistics for the national tourism bureau.

The prediction however will be probably downgraded. It had been reduced after an attack on a hotel housing both tourists and diplomats in Sévaré in the center of the country in August, but hasn’t taken into account the consequences of the Bamako Radisson attacks in November.

Even the organizers of the Festival on the Niger (which was to be held from 3 to 7 February 2016 in Segou), one of the largest musical events in Mali, decided to trim down and cancel the giant event which usually takes place on the banks of the Niger River.

In Bamako hotels and restaurants are open, but it is largely thanks to the guests from among the Minusma personnel, the United Nations Mission in Mali, NGOs, or other development partners.

“Last year on this date, I had between 20 and 30 tourists, who, for the most part, were driving across the continent from the Maghreb to South Africa. This year, nothing,” says the manager of a bed and breakfast in a residential area of Bamako.

If there is a glimmer of hope in all of this, it is the business travel sector. “It’s starting up again little by little,” said Moussa Dembélé, without giving any further details.