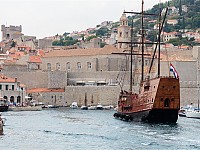 The popular fantasy drama “Game of Thrones” has been running for five seasons, using Croatia as a back drop each time. The coast cities of Dubrovnik – or rather King’s Landing if you’re familiar with Westeros – and Split are the key settings in the show. By embarking on a trip to Croatia, the fans can discover their favorite Game of Thrones locations up close and dive right into the world of Starks and Lannisters.

Split’s most famous tourist attraction is one of the Game of Thrones locations – the Diocletian’s Palace. This structure, a UNESCO site, is more than 1,700 years old. Its walls and cellar is where Daenerys raises her three dragons and locks them up after their murderous rampage.

Another setting of the show can be found just 20 minutes north of Split – the fortress of Klis. This castle is used for the outside shots of Meereen, which is the largest of all three slave cities and gets overthrown by Daenerys. The fortress used to be a castle and home of many Croatian kings, who certainly enjoyed the great view of the valley, the city to their feet and the Adrian coast. Today, visitors can explore the entire historic fortress.

Originally, the palace was the residence of Diocletian – one of Rome’s greatest Imperators – around 300 AD. Even though the upper floors did not pass the test of time, the tunnels below the building, which were used as a trash dump much later, stayed intact. In 1952, the tunnels were finally excavated and open for visitors.

Fort Lovrijenac, also known as the Gibraltar of Dubrovnik, can be seen in the battle of the Blackwater, in which Stannis Baratheon attacks King’s landing in order to take over the throne. This fort on the rocks lies only 37 meters above sea level and outside of Dubrovnik’s city walls. It is regarded as a historic symbol for this city’s resistance against the republic of Venice.

Dubrovnik’s imposing city walls look like they were built with the show in mind. Actually, they have been around since the 13th century and were expanded several times. They are known as one of the greatest fortifications of the Middle Ages, as they had never been taken over by foes during that time.

Not very far off from Dubrovnik, the Trsteno Arboretum is open to tourists. It is littered with lush gardens, which often serve as a backdrop for characters such as Tyrion, Lord Varys and Margaery Tyrell. This is where they plot their schemes and intrigues in the red keep. The gardens at the shore, which were developed in the late 15th century in Villa Gučetić-Gozze, span 25 Hectares and also include an aqueduct, a mill and a well which was modeled after Neptune. They are part of Dubrovnik’s most beautiful architectonic gardens.

The beautiful St. Dominik street in Dubrovnik’s UNESCO protected historic downtown was used in several scenes throughout the series. Viewers will most likely recognize it from the “Walk of Shame” through King’s landing, which queen Cersei has to make as an act of atonement. The street can be found close to the Dominican monastery and leads up to the fortress Revelin in Ploče, the historic city’s Eastern entrance.

The island of Lokrum, not far from Dubrovnik, is yet another Game of Thrones locations – it plays the role of the port city Qarth, where Danereys visits the spice king. The island can be reached by boat in only 15 minutes, if you start at Dubrovnik’s historic port. Lokrum is a conservation area and reservation, where animals such as peacocks live. One of its main attractions is the small lake Mrtvo More or Deadsea, a small crystal-clear pool suitable for bathing.