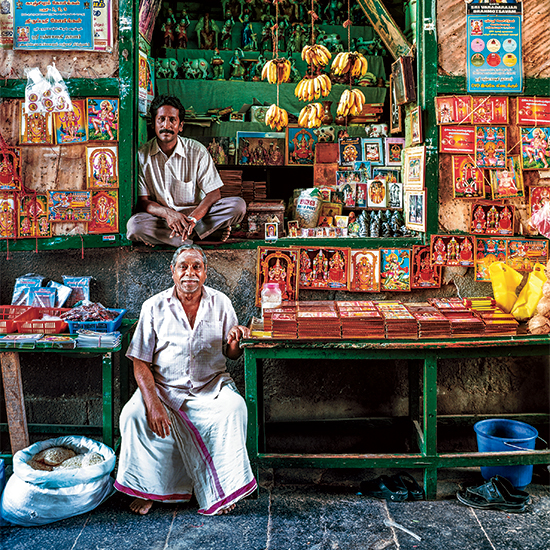 The idli welcomes me into the day like a slightly flattened moon that has landed on my plate. You could rest your cheek on it, but the best thing is to feel its porous warm surface on your tongue, to savor its innocent taste. Three to four inches in diameter, the idli, a steamed cake traditionally eaten at breakfast, has tiny shallow craters over its surface where the batter has bubbled. What does it taste of? Of soft dough. It comes with coconut chutney—fresh grated with a bit of chili—and sambar, a spicy stew made with tamarind, lentils, and spices. The idli to me is emblematic of the purity I often encounter in the city of Chennai.

Though it’s India’s fourth largest city, and an important center for industry and film, Chennai is a place of invisible charms. Its appeal can’t be photographed—you feel it rather than see it. Anchored in an ancient culture of devotion, the Dravidian, this place has always felt to me more Indian than any other part of India I’ve been to. The atmosphere of devotion is palpable practically everywhere in the city—it is Chennai’s central attraction. No matter how new the venture, or how commercial, it seems to enter a force field of all the Hindu gods and avatars prayed to in southern India.

While having breakfast, I looked out the window of my hotel, the Raintree, and saw a woman in a sari sweeping the road. Just then the phone rang and the concierge said, “Your car has reported, Madam.” This sentence transported me to some grand estate from the 1920s. It was Madras then, not Chennai. The names of streets have since changed from being decidedly British to not-British, after independence, but the old names and numbers remain on houses and shops because they are the ones still remembered. Mount Road, where you’ll find the city’s newest and most impressive hotels—the ITC Grand Chola and the Raintree—is now Anna Salai.

I was to spend just over a week in Chennai, and thanks to a friend who had left for Delhi, I had a pass to the Madras Music Academy’s yearly festival. The performers came and sat cross-legged on a dais behind dense rows of tropical flowers for two, sometimes three hours. The player of the mridangam—an oblong drum held sideways across the knees—readjusted the cloth beneath his instrument from time to time and shifted his legs and feet when tuning it. Carnatic, as the music of South India is known (as opposed to the more melodic Hindustani kind, from the north), does not “transport”—it leaves you where you are, in an ecstatic present. It is made of gurgling sung improvisations, and the violin, held with the scroll pointed toward the floor, exactly mimics every virtuosic melody improvised by the singer.

While listening, I gazed at the saris—Kanchi silks, Bengali muslins, and the newer jute saris. I looked at the way gentlemen wore their dhotis, whether they had a dark mark on the side of their ankle where the foot rested on the ground from all the time spent sitting cross-legged. Some men beat the back of their hand, then the palm, on their knee to keep rhythm and as a sign of appreciation. Occasionally, I took a break for some “tiffin”—a light cooked meal such as vadai, savory miniature doughnuts, or pongal, a mixture of rice and mung bean dal—on a fresh green banana leaf.

At the gate to the academy, an unadorned white volume, there were stylized marigolds drawn in rice flour on the asphalt along either side of the road that are meticulously retraced once a day by hand. These designs are on many South Indian thresholds. Such quiet displays of devotion are an antidote to the chaos of Chennai. But there is no hurry here, only a hallmark Indian swiftness. And the most basic wares at a street stall look like offerings in a temple: piles of limes, rows of knapsacks, unfurled synthetic saris, yellow and red soccer balls, hanging paper stars, and purple and orange packets of snacks by the yard hanging from strings are as good as flower garlands. Even a row of gray plastic tubing takes on an ornamental perfection. Everything is a shrine, everything is an altar.

At Radha Gold Jewellers, in Mylapore, Chennai’s oldest neighborhood, there were “dance jewels, temple jewels.” These are the adornments made of gold, pearls, and stones worn around the hairline, or as dangling earpieces shaped like carousels, by dancers of bharata natyam, a classical Indian form once practiced by initiates within temple compounds. I was given a calendar with a picture of the voluptuous goddess Lakshmi on a Bazooka-pink lotus pasted on a stiff board. She wore a grass-green sari edged in gold, a gold necklace and headpiece.

One local form of sightseeing might be called “saint-seeing.” I couldn’t help gazing at all the pictures not only of gods and goddesses but also of human sages whose photographs hang in offices, shops, and homes, usually placed high above doorways and cornices. There is the Turkish Mira Alfassa in her spangled chiffon saris; the guru Sri Aurobindo, with his mad stare and long white beard; and Ramana, with his doe eyes, plain loincloth, and narrow, almost feminine shoulders. They look straight into the camera and their eyes do something no lighting designer could ever explain or duplicate: they seem to travel out of the frame to look into yours.

The guide who accompanied me around the Madhava Perumal Temple in Mylapore told me that the stone used to make an idol is just a stone but that not unlike the blank paper that is put through a printer and comes out as currency at the other end, when that stone is prayed to, and chanted over, for years, even centuries, it becomes charged.

That must be true of these saints, too, since they were once only human. Then he explained the symbolism of prasad, or offerings: to offer a coconut, for instance, is to say, “My heart is as black and rough as this coconut but if you crack it, the inside is white and soft. Please make me like that.” In the course of the visit I was offered marigolds, pink roses, red kumkum powder.

One day, I was wandering down Chamiers Road when I came upon a Ganesha temple the size of a pantry. I approached: beyond a red-and-white-striped entrance was a Ganesha decorated with a piece of gold fabric around his neck, a hibiscus between his feet, incense burning around him. How could any god resist such tender treatment?

That afternoon, I found myself at the Kapaleeswarar Temple. It was sundown, people were beginning to stream in. There was no hurry, no pushing, no crowding. It was as though a mass of several hundred people could behave as one. I suddenly saw the many-headed and many-armed gods and goddesses as an expression of a community with a single purpose. The women wore their best saris. Some had jasmine blossoms woven into thick braids down their back. The men, especially the older ones, many Brahman priests among them, wore white dhotis edged in gold or red or yellow, and their foreheads were smeared with sandalwood paste—a three-pronged design reminiscent of a tuning fork. I admired a gentleman’s ingenious way of fixing the broken temple of his eyeglasses with string so that it looked as though a worm had wound its way around it, and another’s purple and white polka-dot earmuffs, perhaps a protection against the loud drums around us.

By one shrine to Nandi the bull, thought to be the vehicle of Lord Shiva, to whom this temple is dedicated, women lined up, and when they reached the crouching black beast, leaned over, or knelt, cupped its ear with their hands and whispered into it, as with endearments to a loved one. Their prayers may have been for fertility or to ask Nandi to inform his master of their visit. A much larger Nandi had been taken out of its shrine and was carried on a palanquin by 16 men. Their movement created a vast shifting current in the crowd. Right above one corner of the temple was a monumental fluorescent rendition of the recently ousted chief minister of Tamil Nadu state, Jayalalitha Jayaram, her distinctive silhouette in a sari, hands joined in a namaste. It lit up a corner of the sky in blues, reds, and greens. 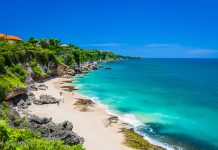 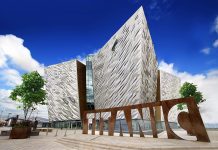 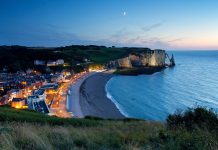 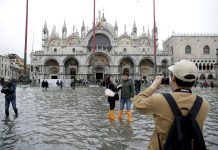 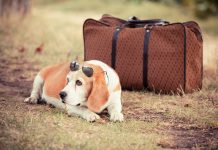 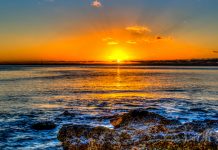