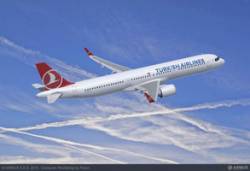 Demonstrating its commitment to linking Istanbul to all of the world’s major tourist and business centres, Turkish Airlines today adds San Francisco to its global network.

To commemorate this important event, a special livery has been applied to the aircraft operating the first flight on the new route. To signify the new link between these two major world cities, Turkish Airlines combined a modernist perspective with minimalist design and created a unique livery for the Boeing 777-300, named Safranbolu, which will inaugurate the service between Istanbul and San Francisco.