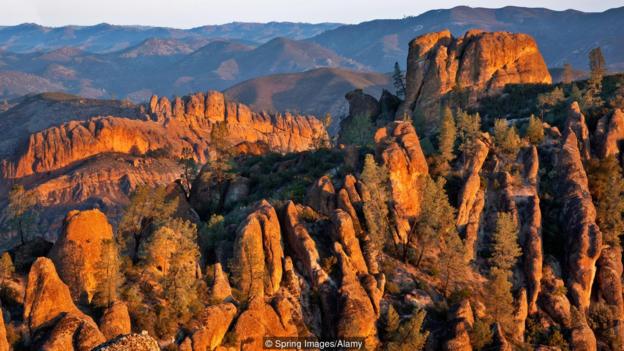 “These are real good places to take signals from, because you get a lot of wide-open area, plus, you’ll get visuals on condors,” Neidhardt said, with a radio antenna in hand. Framed by rolling hills and grey pines, he was scanning for transmitters of the 80 birds who call the area around the Northern California park home.

As a kid, raised on a South Carolina lake, Neidhardt was a budding naturalist, who trapped lizards, frogs, toads and anything else that “flew, swam, crawled or hopped”. He then studied and released them.

“You know, critters is what I liked,” said 72-year-old Neidhardt, who has been on the park’s California Condor Recovery Program crew for six years. “And not just critters, but wildflowers and the outdoors, too. But somehow, I ended up with a career in construction.”

In 2010, after 40 years working as an estimator project manager on sites throughout the southeastern and western United States, Neidhardt retired and embraced his boyhood calling by becoming a volunteer at Pinnacles National Park – the newest US National Park, designated in 2013 – with its 26,648 acres of trails, caves, rocks, grassland and eponymous volcanic rock spires. Among those pinnacles, which apex at 3,304ft, condors nest and learn to soar – with the help of Neidhardt, other volunteers and paid park staff.

Before retiring, Neidhardt had only visited Pinnacles once. But in 2010, he read about the condor crew in a newspaper article and planned another visit. Although he didn’t see a condor at that time, he got inspired while hiking the Juniper Canyon trail and saw a rappelling biologist swap a wooden placeholder egg for a pipping egg, which was almost ready to hatch after incubating at the Los Angeles Zoo for 56 days. “I watched this whole process and it was exciting to me, so I said, ‘Do you guys need help? Volunteers?’ They said we’d love it.”

For about one week every month, driving north from his home near scenic Morro Bay on Highway 1, Neidhardt now spends his nights in an onsite cabin for biologists and volunteers, and his days meandering trails in hiking boots and fitted with trekking poles. He hauls his 30lb pack up high peaks, scanning for condors, taking notes and educating hikers about the once endangered bird.

California condor conservation efforts began in 1987, as hunting threatened to send the carrion feeders into extinction. Then, the last 22 free-flying birds went into captivity, until 1992, when they re-joined the wild under the guidance of the US Fish and Wildlife Service and programs like the one at Pinnacles, which are helping the condors become self-sustaining.

Neidhardt said that many of the park’s 200,000 or so annual visitors are unaware that it’s one of three active release sites for captive-bred California condors. Here, the condor team monitors the birds’ flight patterns through a tagging system, administers check-ups and drives condors to the Los Angeles or Oakland zoos for medical treatment. The team also observes the youngest birds, or rookies, in an enclosed flight pen until they are ready to soar for the first time. The oldest rookies Neidhardt met in 2010 are now breeding, and he enjoys watching them integrate into the flock. “You get to know them pretty well and it’s a really satisfying thing, like watching your kids grow up,” he said.

Neidhardt marvels not only at the park’s condors, but at its 625 plant species – like chia, wild cucumber, bush poppy, venus thistle and buckwheat – that sprout among the rocks. “Make sure you grab a black sage leaf and rub it between your fingers as you walk by, so you can take in the aroma,” Neidhardt said to a group hiking the Condor Gulch trail.

To further forge his commitment to the condors, Neidhardt founded the Pinnacles Condor Fund in 2013 (which later joined Pinnacles Partnership) to support recovery and education programs. As a board member of the organization, he speaks throughout northern California and leads hikes in the spring and fall. Over six years, Neidhardt has spent more than 3,000 hours volunteering – a schedule almost equal to a full-time job – but he loves it: “Hey, it beats workin.’ My favourite part is just to be out there doin’ it.”