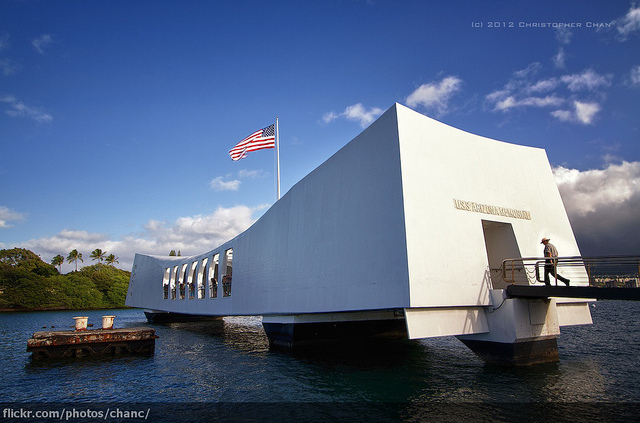 HONOLULU (AP) — Tours on the USS Arizona Memorial have been suspended indefinitely after a vessel struck and damaged the structure’s dock Wednesday, the National Park Service said.

Instead, boats were taking visitors to a spot in Pearl Harbor near the memorial where they can view it from a distance, said spokeswoman Abby Wines.

“At this point it’s not safe for visitors or anyone to land there and disembark at the memorial,” Wines said.

The crash occurred when the hospital ship USNS Mercy and a civilian tugboat contracted by the Navy were maneuvering in the harbor. Either the tugboat or the Mercy hit the dock, Wines said. The Navy and the Park Service said in a statement the incident was being investigated.

A ramp and handrails connecting the dock to the memorial were mangled, Wines said. Park Service and Navy divers were expected to assess the damage from underwater Wednesday.

It was unclear how long tours on the memorial will be suspended, Wines said. The underwater assessments will provide a better idea, but the current situation is expected to continue for at least a few days.

The Pearl Harbor Visitors Center, which has a museum and gift shop, is still open.

The USS Arizona Memorial was built to remember the 1,177 sailors and Marines killed on the Arizona when Japanese planes bombed the battleship during the 1941 attack on Pearl Harbor. It straddles the rusting, sunken hull of the Arizona.

To get to the memorial, visitors must board a boat at the visitors center for a short ride in Pearl Harbor. Visitors walk into the open-air memorial from the dock.

This article was written by Audrey Mcavoy from The Associated Press and was legally licensed through the NewsCred publisher network.