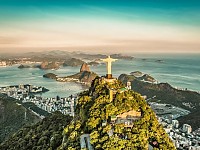 The Central Bank has released the percentages for expenditure and income in foreign exchange from tourism in Brazil in 2016. The data revealed that from January to December, foreign tourists spent US $6.024 billion in the country, representing a 3.08% increase in revenue in 2016 compared to 2015.

The increase was largely caused by the Olympic Games held in Brazil, according to the authorities. In absolute terms, the revenue generated by Rio 2016 was US$166 million.

This figure represents the Games’ contribution regarding the revenue, but it is impossible to calculate the increase in visitor arrivals because of the Olympics. It is difficult to say what would be the difference in revenue if it were not for Rio 2016, but it is true that hosting the Olympic Games brought Brazil a substantial increase in foreign exchange revenue from tourism and contributed to the positive result.

Spending by Brazilians overseas, according to the data from the Central bank, amounted to US $14.497 billion, down 16.48% in 2016 compared to 2015 (more than US $8 billion less). This was caused by the political and economic crisis and the exchange rate instability of the dollar during the last year, which began in January with the exchange rate being US$1 to BRL 4.10 and falling to BRL $3.50 after only the first quarter.

In the midst of the difficulties faced by tourism in Brazil, the year 2016 was a positive year. The sector continues to provide strong support for the Brazilian economy and has the potential to do more for the development of the country.