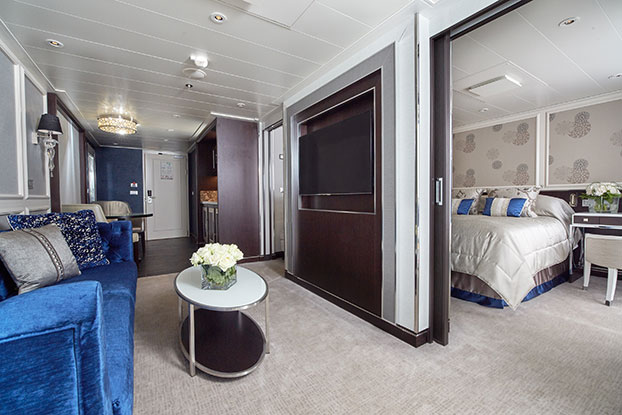 A host of cruise product announcements this week points to a busy 2016 for travel agents. From a new ship to a new cruise brand to new shore excursions, we’ve rounded up the top developments to keep on your radar.

This week Regent Seven Seas Cruises released more details on its newest ship, the Seven Seas Explorer, which is set to launch in summer 2016: A series of mock-ups of the suites onboard its newest vessel.

The line previewed two suite categories, Penthouse Suites and Concierge Suites. With a design the line said is inspired by sapphire jewelry, the ship’s Penthouse Suites have blue accents, custom furnishings and private verandas that stretch nearly 10 feet, plus an entertainment center that separates the living room and bedroom, a marble-topped bar, a dining area and a bathroom. Concierge Suites have a design inspired by Cape Cod vacation homes and offer guests a European king-sized Suite Slumber Bed that faces outwards towards the veranda for sea views, as well as a living/dining/entertaining area and a balcony that stretches the entire width of the room. The balcony also has outdoor furnishings.

There will be 55 Penthouse Suites on the new ship, as well as 140 Concierge Suites and 88 Superior Suites.

As part of the new relationship, Fathom will conduct extensive product trainings for Ensemble members at the 2015 Ensemble Travel Group International Conference set for October 25-29 at the Omni Orlando Resort at ChampionsGate.

In terms of special itineraries, Travel Leaders Group has announced the details for its 2016 Distinctive Voyages program, which is a collection of over 200 sailings throughout the world that include exclusive, complimentary amenities.

Clients who select a Distinctive Voyages cruise will have the opportunity to enjoy extras such as a private cocktail reception and an exclusive shore event to connect more closely with the local culture. Many sailings will also feature the services of a Distinctive Voyages Host. All of these amenities are available at no additional cost when booked through a Travel Leaders Group agency.

Silversea has announced a few new land programs for travel agents to be aware of, including 20 the line will offer during its World Cruise 2016.

Departing in January, and sailing from Fort Lauderdale to Venice, Silversea’s 115-day World Cruise 2016 will be hosted aboard the all-suite Silver Whisper.

Highlights of the overland adventure program include visits to the Cloud Forest at Mashpi Lodge, a Great Barrier Reef Retreat, an exploration of Angkor Wat, a Legendary Mandalay program, a Kandy by Chartered Seaplane adventure and a tiger-focused program at Ranthambore National Park in Rajasthan, India.

Finally, for theatre fans, new theme cruise organizer Broadway Theatre Cruises has announced that its Broadway-themed “Sailing with the Stars” itinerary is now open for bookings.