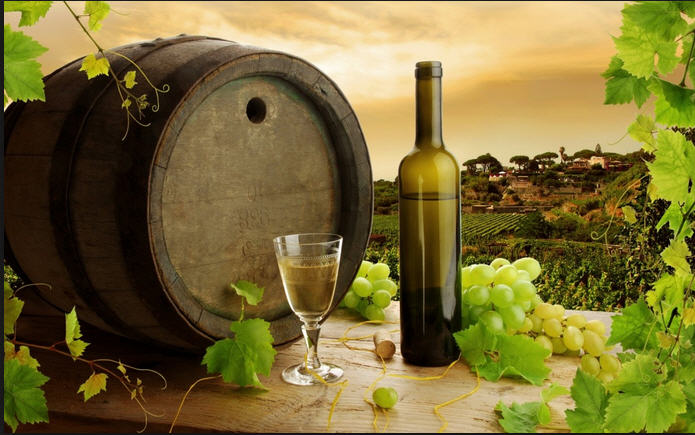 “Do you want to try Stalin’s favourite wine?” asked my Georgian friend Nino.

The art of making Georgian wine

After harvesting, the grapes are pressed either by foot (the original, ancient method now used just for fun, with participants wearing rubber boots) or by a machine operated by hand.

The resulting grape juice is transferred into kvevris (large clay vessels) or oak containers and then stored for 10 to 14 days. It’s then moved to another container until it becomes clear. The remaining grape stems are set aside for making the strong Georgian spirit known as chacha.

The temperature during the fermentation process is very important. Storing fermenting grape juice in cold temperatures keeps the wine sweet (needed for wines like Khvanchkara). If the grape juice is left to ferment at room temperature, it produces a dry wine.

The containers are kept open so that fermentation continues, and after about one month, the wine is ready to be bottled.

After a three-day hiking trip in Georgia’s stunning northwestern region of Racha, my two travelling companions and I were excited by the bizarre offer. Produced since the beginning of the 20th Century, the grapes for the semi-sweet red wine called khvanchkara – reportedly Stalin’s wine of choice – are only grown in one very small area of the Racha region, also called Khvanchkara.

Upon our arrival at the Aleksandrouli winery, Nino’s friend Dato led us on a brief tour of its stainless steel fermentation vats, the modern counterpart to the nation’s still-used ancient tradition of underground fermentation in kvevris (large clay vessels). We ambled about the warehouse, admiring the sexy, Italian-designed bottles of khvanchkara, and tried the wine, which tasted a bit like raspberry syrup. Dato stood smoking a cigarette, looking out at the low vine-covered hills behind us.

I had only heard stories about the famous Georgian supra, the traditional feast offered spontaneously to only the luckiest of visitors. I’d been told that the incredibly generous villagers ply guests with local dishes and endless pours of strong, homemade wine, accompanied by countless long, nostalgic and heartfelt toasts. I couldn’t believe that we might get the chance to attend.

As we drove to a nearby small restaurant, Dato called ahead to let them know we were coming. My stomach growled and we all grinned widely at each other in giddy anticipation.

It was 3 pm when we arrived. Dato’s friend, Mamuka, was waiting in the parking lot, and there were no other customers in the dim restaurant space. A woman with a bored expression smoked and sat behind the cashier’s desk, and a man leaned on the counter, his back to us.

Plates, silverware and glasses had already been set for six in the small private dining room. The centre of the table held two plates piled with pizza-sized triangles of golden, flaky khachapuri (traditional stuffed breads), some filled with ground beef, some with soft imeruli, a fresh cow’s cheese from the adjacent Imereti region. There were bowls of chunky tomato-cucumber salad with fresh parsley, plates piled with thick slabs of additional imeruli and platters of glistening fried potatoes.

We took our seats slowly, eyes glued to the food. Dato sat at the head of the table. A short-haired, stoic-faced waitress walked in briskly and set down two giant pitchers of mustard-coloured tetra, a homemade, semi-sweet white wine made from the tsulukudze tetra grape, which only grows in the Racha region. This was the fuel for our supra fire.

Wine was poured generously as Dato embarked upon his first toast. With Nino translating, he told us how happy he was to celebrate and drink with us. “We don’t sit here and eat this much food and drink this much wine for no reason – we share it with you, our guests, to know each other better. So let us drink to tradition.”

Nodding in giddy agreement and straining our arms to clink our sweating glasses with every person at the table, we took our first drink of the refreshingly bitter tetra wine (we sipped, our hosts chugged the entire glass). As soon as we saw Dato and Mamuka begin to eat, we quickly attacked the food. Amid the sounds of chewing and gulping, the waitress returned again and again, carrying platters of grilled sturgeon garnished with silky stalks of dill; small ceramic bowls of narsharab (a deep-red pomegranate sauce); and two more bowls filled to the brim with khashlama, a clear stew of boiled lamb, cabbage, tomato and onion. To my left, a cast iron skillet appeared, packed with juicy mushrooms grilled in a ketsi (clay oven).

Near the head of the table, a white plate was stacked with mtsvadi (shashlik), long, metal skewers loaded with fat chunks of barbequed pork. We each grabbed a skewer, not waiting for our hosts this time, and slid the meat onto our plates to devour.

There was also a glass bottle of tarhun, a popular carbonated drink named after its tarragon flavour. As we poured the fizzy, neon-green liquid, a strong but sweet, herbal scent hit our noses.

“Eat! Eat! Drink! Drink!” Dato pushed us with his raised glass. But nearly every time I tried to sip my wine, he or Mamuka plunged into another speech.

One long toast discussed how the Greek myth of Jason and the Golden Fleece actually took place in Georgia. Another turned into a recital of a famous Georgian poem, which Nino said she had no idea how to translate. Yet another was a toast to women.

Then came a toast announced as mandatory, a tribute to the past, to those who were no longer with us. But since it’s forbidden for this particular toast to be the last toast of the evening, Dato and Mamuka ventured on, wishing us much happiness in our travels and success in our lives.

By toast number eight or nine, things seemed as though they would never end. Our host and Mamuka had laughed so hard that their faces had turned red. We could only make laughing sounds from our throats as our mouths were constantly full of food. We’d been feasting for at least three hours by then — anything less could not be called a feast.

Finally, I leaned over to tap Nino on the shoulder. “We have to leave. It will be too late.”

Our sense of immense gratitude to Dato and Mamuka conflicted with our desire to get back on the road, a desire very much dimmed by heavy stomachs, strong wine and palates still tingling with a taste of pomegranate sauce.

We watched Nino gracefully negotiate our departure with big smiles and laughter. But group photos still had to be taken, so we shuffled ourselves into position, smiling sleepily into a few different cameras.

In the parking lot, we shook hands and hugged heartily in place of words, stumbling over madloba, the Georgian word for thank you.

Nino translated our promises to return again, and we all laughed at the possibility. I’d be lucky to be a part of another supra – that is, of course, if I was ever hungry again.