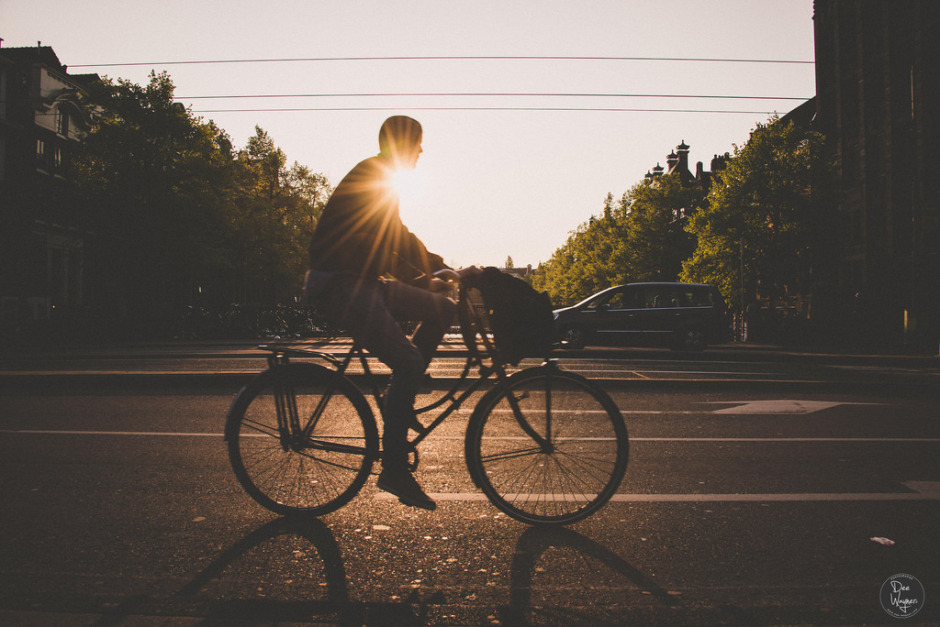 The “bicycling capital of Europe” tops many lists—including this one, it seems—as the most bike friendly city anywhere. Safe and extensive route networks, serious governmental promotion, and a bike culture that transcends class boundaries are all reasons why 40% of the city’s traffic moves on two wheels.

Barcelona’s Bicing program, one of many mass bike rental systems that have popped up recently in Europe and beyond, debuted in 2007 in the Catalonian capital. An annual Bike Week is held in late May to spread the word.

Commuting Berliners are never lonely—400,000 of them pedal to work each day. City leaders still aren’t satisfied with this figure, and millions of euros have been allocated to encourage more cyclists to get on the streets. One result is a mapping website that helps you plot bike-specific routes.

In the Danish capital, around a third of the workforce gets to the office by bike. By some estimates, that’s more than a million kilometers pedaled every day.

For an alternative and truly bike-friendly urban experience, check out Christiania, a neighborhood of 850 that, in addition to setting up a semi-independent government and decriminalizing trade in cannabis, has banned cars.

Amsterdam unfairly gets all of the credit for being the best cyclist city in the Netherlands. In terms of the percentage of journeys made on bike, that honor actually goes to Utrecht at a sound 50%. The city is also in the process of building the world’s largest bicycle parking facility. That mixed with the incredibly relaxed bike culture make Utrecht worthy of a spot on this list.

Paris gets a nod here for its creation of Vélib’, one of the world’s largest public bicycle rental programs. Twenty thousand stylish three-speeds are distributed among 1,450 rental stations throughout the city, available to subscribers at variable rates (rides under 30 minutes are free).

Denver’s little hippy neighbor to the north dedicates 15% of its transportation budget to improving and promoting bicycle travel. Nearly every major roadway has a designated cycling area, and they’ve even instituted a pilot program to get kids biking to school. This guy has created a very cool color-coded route map, complete with local attractions.

Late during his 22-year tenure, Mayor Richard Daley became set on turning Chicago into “the most bicycle-friendly city in the United States.” It doesn’t appear to be all talk, either, as more bike lanes pop up all the time, and more laws that protect cyclists’ safety are passed.

The City of Chicago website has all you could ever want to know about the city’s bicycle initiatives.

It’s said there are more bikes than cars in this small, northern California city of 65,000. Not only that, but its official motto is “Most bicycle friendly town in the world.” The entire month of May is dedicated to Cyclebration…and the list goes on.

The U.S. capital is also one of the most bike-friendly cities in America. With its wide avenues, its ubiquitous bike lanes, its bike share program, and traffic congestion that makes biking a much quicker transportation option, it was probably inevitable that D.C. would eventually become a cyclist’s city. And because it’s a city of political types, there’s a super active advocacy group, the Washington Area Bicyclists Association, fighting for cyclists (and, of course, helping them network).

Canada’s capital claims the highest percentage of bike commuters in the country, if not the continent. Its 170km of paths make it easy to get from point A to B, though two-wheeled traffic is sure to drop between December and March. Visit the City of Ottawa website for more.

You were worried there for a second, weren’t you? No, I haven’t forgotten what most people consider the bike capital of the U.S. The only thing as impressive as Portland’s bicycle infrastructure (including a 260-mile network) and commuter stats (almost 10%, the highest in the country) is the camaraderie of its cyclist community.

The founding city of Critical Mass can’t be overlooked. Over the past decade, bicycle collisions have declined while the number of bike commuters has nearly doubled.

Add city initiatives like removing car parking to make room for bike parking, distributing “Watch for Bikes” stickers (to be placed on driver’s side rearview mirrors), and its fledgling bike share program, and you get one of the world’s bike-friendliest cities.

Debatable? Sure. But I wouldn’t call the city with probably the most bicycles of any in the world to be bike unfriendly.

The sheer number of cyclists necessitates some pretty sophisticated infrastructure for the travel, storage, and repair of two-wheeled vehicles.

African cities aren’t the first I think of for bike friendliness, but Cape Town is doing its best to change that.

Bogotá’s transportation initiatives have been a model for change throughout Latin America, and its treatment of bicycles is no exception. Miles of safe, segregated bike paths and Sunday Ciclovía events (where main thoroughfares are closed to cars) make Colombian cyclists very happy.

The world’s largest city has been making some strides lately towards becoming one of the world’s great bike cities. It helps that driving has become prohibitively expensive in the Japanese metropolis, so biking is often a much more practical option for residents. Practical to the point where a staggering 14% of all trips made in Tokyo are made on a bike.

With more than 700km of bike routes and plenty to see along them, Australia’s fourth largest city takes it for Down Under. Find maps, recommended rides, and other cycling resources on the Perth Bike Maps webpage.