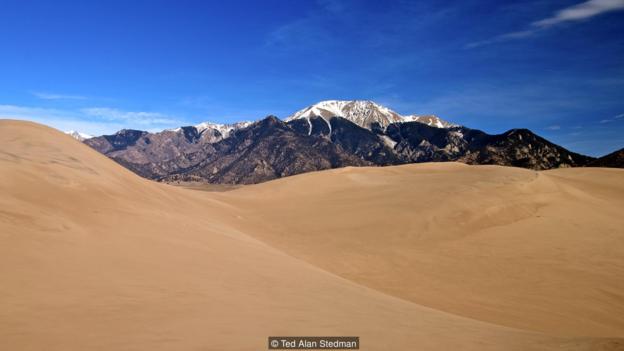 Otherworldly. Dramatic. Stark. Surreal. Just so weird! Between gasps and quizzical stares, these are common refrains from first-time visitors at Colorado’s Great Sand Dunes National Park and Preserve. Truth is, these reactions carry a lot of cachet here. While so many of the US National Parks boast purple mountains majesty, serene shorelines and impeccable forests – Great Sand Dunes is the epitome of an anomaly.

You can sense it before stepping foot in the 150,000-acre park. During summer months, the dunes from afar can be mistaken for a wavy mirage as heat drifts up from the 8,000ft-high desert floor of the surrounding San Luis Valley. Get a little closer, and the scene reveals itself for all its bizarreness, sprawling like a misplaced 30-sq-mile Sahara sandbox on the shoulders of raw 14,000ft peaks raking the sky with saw-tooth symmetry.

Tucked into a remote fold of the central Rocky Mountains, the highest sand dunes in North America can beckon a range of emotions. For Zach Tipton, a former Great Sand Dunes artist-in-residence, the park’s 440,000-year-old geologic oddity provided inspiration and introspection for the 30-year-old musician to craft a hauntingly melodic song.

“I love constrained song-writing challenges,” he said, “and national parks represent unique places largely untouched by human interests.” During the application process and research for the park system’s artist-in-residence role, he stumbled across Great Sand Dunes, a park he’d never heard of. “It seemed like a perfect fit for my personality,” he explained. “I felt I could stretch my boundaries without the pressure of altering my song if someone deemed it ‘weird’.”

After being accepted to the artist program, Tipton, who goes by Mister Zach in the music world, spent a week in 2013 at Great Sand Dunes during the nearly empty winter off-season. Cloaked in intermittent veneers of snow, the dune fields often resembled a frozen ocean of tumultuous white waves cascading at the foot of the towering Sangre de Cristo Mountains – a tableau that intrigued Tipton beyond expectation.

The solitude that he felt during the five-hour, round-trip hikes to Star Dune – the park’s highest at 755ft – was something he’d never experienced before. “There was nobody anywhere, and it’s like you’re on the moon,” he recalled. “But it’s winter, there are massive mountains behind you and you look out west over the [San Luis] valley to the distant San Juan Mountains and feel like the only person on Earth.” In essence, Great Sand Dunes became a blank canvas for the musician.

As melody and verse began to formulate, it was the dunes’ solitude and austerity that inspired the musician. He’d  trudge over a frozen, lonely Medano Creek – a far cry from its late spring incarnation, when it transforms into Colorado’s best beach and crowds of families play in the shallow water as snowmelt bleeds from the nearby peaks.

With winter’s solitude came freedom. Since there are no trails (or signs, markers or man-made objects), Great Sand Dunes might be the most natural, visitor-friendly park in the system, allowing travellers to roam at will. Tipton would zigzag up the ridgelines of lesser dunes, past favourites like Star Dune and High Dune, and immerse himself in the labyrinth of sand, alone with his thoughts.

But solitude came with surprises. During evenings, he’d hear the mournful howls of coyotes echoing over the expanses. He spotted the tracks of mountain lions, which often stalk herds of mule deer clustered along the perimeter of where the dunes meld into scrub brush, wetlands and rocky outcroppings of the Sangre de Cristos. Sometimes he’d spot tiny ant-like figures in the distance – people near the park headquarters. Then the diffused thoughts percolated into a tangible idea: as removed as they seem, the Great Sand Dunes represent a moment of “incomplete isolation” – a phrase that became the namesake of his song with verses that begin:

“Hearing coyotes while alone out in the dunes and hiking among these mountains of sand that stretch far as you can see made me feel vulnerable, maybe confused about what human existence means,” Tipton reflected. “I saw nothingness for hours, like something from a science fiction movie. But sooner or later I’d come across something: an animal track, a lone plant, a bird, the stars overhead. As isolated as I felt, nature was all around, and the Sand Dunes were the device to realize that.”