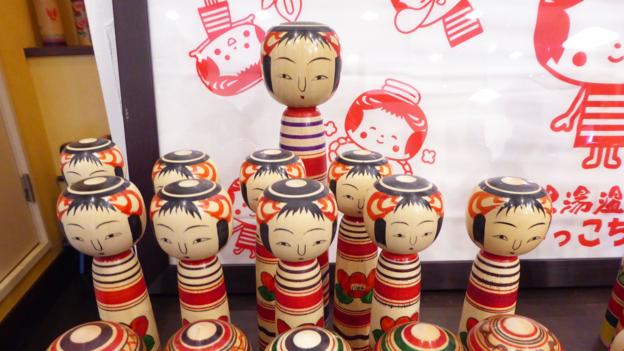 In a way, kokeshi dolls owe their existence to the snow. The iconic wooden dolls with their gentle, demure expressions hail from Japan’s mountainous northern region of Tohoku, an area currently known as the site of the 2011 earthquake and tsunami.

However, around 200 years ago, this is where kokeshi dolls first took form, when woodcutters looking for work migrated from the south of the country to the thickly forested Tohoku region – nicknamed “Michinoku” (Back Roads) as it was so remote – bringing with them their woodworking techniques. For most of the year, they made a living creating tableware, using wood remnants to make toys for their children, fashioning koma (spinning tops), kendama (a cup and ball game) – and the kokeshi dolls. However, once winter came, it became too cold to work, and the woodcutters sought refuge in the area’s many onsen (natural hot springs).

“As winter progressed and it wasn’t possible to work in the mountains, [the woodcutters] soaked in the onsen to melt away the fatigue from working all summer. At that point, [in order to earn some money], they started selling to the tourists that arrived at the bathhouses,” explained Masafumi Abo, fifth-generation kokeshi master from the Tsugaru area in Aomori Prefecture.

Soon, the dolls became intimately associated with onsen areas. Today, there are 11 areas – all in Tohoku – where traditional kokeshi are made. Each locale’s dolls are unique, reflecting the motifs and characteristics of the local people, history, plants and folklore. For example, dolls made in the Tsugaru area of Aomori are decorated with Ainu (one of Japan’s indigenous groups) patterns, while in Naruko Onsen in Miyagi, the dolls’ heads turn and squeak, echoing the name of their birthplace whose characters mean “crying child”.

The materials, too, differ depending on where the dolls are made, with the craftspeople using whatever wood was easily available. On the Pacific side of the region, it tends to be dogwood, which is hard and has a white colour, while near the Sea of Japan, painted maple, which is yellower in colour, is often used.

At first the dolls were just sold as souvenirs for children, but after a while they started to have a certain cachet among adults, who began to seek them out as collectors’ items. The first boom was in the Taisho period in the early 1900s, when they became popular with artists and novelists, while the second was in the 1960s and ‘70s. The buyers in both cases tended to be wealthy older men who collected the dolls as status symbols.

Akihiro Sakurai, a fifth-generation kokeshi master from the Naruko Onsen area of Miyagi Prefecture, came of age during the second wave, and he remembers how he got his start during the 1964 Tokyo Olympics.

“I’ve been making kokeshi since middle school. At the time, there was a kokeshi-making club in school… and we sent 12,000 kokeshi to athletes and associates,” he said. “The club was the centre of my life and the kokeshi makers from our local area came and taught us, and we practiced like mad to make those kokeshi.”

Today, the kokeshi masters say they are experiencing a third revival – although this one has a different clientele.

Kokeshi’s simple, smooth shapes, bold colours and strong lines have given them a modernist pop appeal. In fact, game designer Shigeru Miyamoto has said that Nintendo’s Mii avatars (the digital avatars on the Wii platform) are based on kokeshi, with their bulbous, oversized heads on thin, smooth bodies. Users can customize Miis to look like themselves or even celebrities.

It’s become popular – particularly among young women – to collect cute, modern-style kokeshi (both made in Tohoku and elsewhere) and share them through photos on social media. A quick Instagram search turns up cat-shaped dolls, holiday-themed kokeshi and tiny, felted kokeshi creations. Also, kokeshi shows have sprung up, such as the Kawaii [cute] Kokeshi Exhibition at the Yokohama Doll Museum in October and November, and the Nationwide Kokeshi Festival in Naruko Onsen in September. People are trying their hand at making the dolls at home, and there’s even something called kokeshi bokko, putting on puppet shows using kokeshi.

“Recently, the number of young women has really increased. But they buy small ones – because their apartments aren’t very big. And kokeshi have entered pop culture, too. Girls are wearing dresses modelled after kokeshi,” said Shinji Onuma, the fifth-generation owner of Ryokan Onuma, a popular inn in Naruko Onsen that’s been in operation for more than 100 years. The inn sees its share of kokeshi tourists, who come both to buy the dolls and to try their hands at painting one, too.

Some kokeshi fans disparage the trendy kokeshi in favour of artisan-made traditional ones. But Akira Suzuki, a third generation kokeshi master based in the Sendai area of Miyagi Prefecture, who makes both cute and traditional dolls, doesn’t mind. “A cute kokeshi is the gateway doll. The more people learn about them, the more they like traditional kokeshi.” And there’s always more to learn. It takes years to be able to competently make a kokeshi doll that is up to artisan standards.

“It’s the study of a lifetime. The more you do it, the more expansion in technique, or history,” said Yukinori Jinnohara, a kokeshi master from the Tsuchiyu Onsen area of Fukushima Prefecture. “Drawing a face is a lifetime’s study. Even after 40 years, we don’t have any faces that make us say, ‘my work here is done’. Craftspeople study their craft until they die. Until they die.”