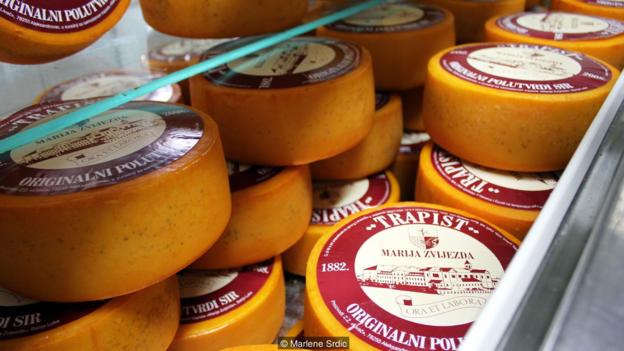 Forget lactose intolerance: when there’s a good cheese to be had, I’m on the hunt. So when my mother-in-law told me about an elusive cheese with no recipe on our family trip to the Balkans, I was intrigued.

Dairy products are probably the last thing you associate with Bosnia and Herzegovina – and rightfully so. The country is kind and complex: a place rich in natural beauty, where you may be offered slivovitz (plum brandy) with your haircut, and where memories of war are still fresh on people’s mind. But what most people don’t know is that there’s a fascinating tale hiding in its cheese.

Just outside the bustling city of Banja Luka lies Marija Zvijezda (Mariastern Abbey). Built in 1869, this was once the largest Trappist monastery in the world, with more than 200 monks. Today it is the smallest, with only three monks residing on site. Still, the serene grounds are beautifully kept: guests are greeted by glorious hydrangeas and soaring trees.

Trappists are an order of Roman Catholic monks who strictly follow the motto “ora et labora” (prayer and work). They produce a variety of products to finance charitable projects and provide for themselves. On the sprawling property at Mariastern Abbey, the monks produce wine, olive oil and liqueurs – but their semi-hard cow’s milk cheese is what they’re known for.

The top-secret recipe has been passed down by word-of-mouth for more than 125 years.

The top-secret recipe has been passed down by word-of-mouth for more than 125 years. To protect the heavily-guarded formula, the production process always involved several monks, each of whom played a different role in its making. Only one monk knew the entire recipe from start to finish.

But this extreme caution was also its downfall. The dairy delight was almost lost entirely in 1996 with the passing of Father Mohor, the last monk to know the full recipe.

When we arrived at the monastery to learn more about this intriguing tale, there wasn’t a tourist in sight. We wandered into the church and explored the peaceful grounds, where Father Tomislav Topic, who is responsible for reviving the cheese-making tradition, resides.

“The original Trappist cheese was produced in a French monastery in the 17th Century, but each monastery had a specific take on the recipe,” Topic said.

He explained that Mariastern Abbey produced the cheese from 1882 and was the official supplier to the Royal Palace in Belgrade and Vienna, until communist rulers briefly banned the cheese in 1945.

“After that year, the communist government took all property from the Trappist monks and forbade them from producing the cheese. During this period, the monks only produced the cheese for themselves or for special ceremonial requests,” Topic said.

And for 10 years after Father Mohor’s death, the cheese was not produced at all. It seemed to be the end of an era. Then in 2007, Topic travelled to the French monastery, Mont des Cats, to learn their cheese-making recipe and process – and resurrect the legendary cheese.

Topic’s aim in producing this delicious cheese was to both to keep Trappist history alive and to create jobs for locals and war veterans. To do this, the monks partnered with Livac, an agricultural cooperative just outside of Banja Luka, who have made the cheese since 2008 and follow the tradition of fiercely guarding its recipe, which is now protected by the World Intellectual Property Organization in Bosnia and Herzegovina.

“The entire process requires a lot of handwork and the cheese must stay in specific conditions of humidity and temperature,” said Livac director Drazenko Budimir, with few details beyond that. “Workers clean each piece of cheese by hand and turn it every few days.”

The room where the cheese was sold, just behind the church, was dark and unassuming. Beyond several tables piled with olive oil and religious memorabilia – goods made to help finance activities like maintaining the orphanage – there was a smaller nook where the cheese was on display.

Dozens of golden wheels the size of my head sat inside cold glass cases with the words “Marija Zvijezda Ora et Labora” imprinted on a maroon-coloured sticker, along with two milestone dates: 1882, the year Trappist cheese was first made in Banja Luka; and 2008, the year the ancient tradition was revived.

Today, more than two tons of cheese are produced each month. They’re then aged for three months before being sold to the public. It can be purchased on-site at the monastery, or in various shops throughout the country. It’s also exported to Croatia, where you can get a rind to go at the airport.

Back at our hotel room, we did what anyone would with a fresh hunk of cheese: we popped open a bottle of wine and got to tasting.

Similar to a rich Gouda, the semi-hard cheese was deliciously mild in flavour, creamy in colour and texture with a hint of pale yellow and some small holes. The rind was soft and golden, and the aroma subtle. It was approachable and easily likable – just like the people who have been producing and protecting it for more than 100 years.