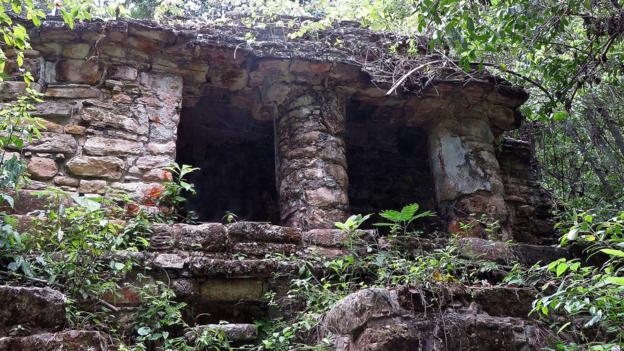 I first met Daniel Chankin in the highland town of San Cristobal de las Casas in the Mexican state of Chiapas.

Daniel, a Lacandon Maya who lives in the rainforest near Mexico’s southern border with Guatemala, told me he couldn’t wait to be back home; he didn’t feel comfortable in town. He only comes to San Cristobal to visit Na Bolom, a museum dedicated to the Lacandon people, where he helps his mother-in-law sell her traditional crafts in the gift shop.

Daniel is one of only about 700 Lacandon Maya still living in the rainforest today. The name Lacandon was given to two groups of peoples who fled deep into the jungle to escape conversion and oppression by the Spanish. They would live in the jungle for the next 500 years with limited contact with the outside world, referring to themselves as Hack Winik, or the True People, until the turn of the 20th Century when loggers, archeologists and missionaries began to arrive. Romanticized for their white tunics and long black hair, these same features often cause them to be the victims of discrimination.

Daniel and I met in the museum’s library, where we found books about his village, Lacanja Chansayab, in the southern region of the Lacandon Jungle. As we talked, I showed him photos from the 1950s in one of the books, and he laughed in surprise as he pointed out his family members.

“I don’t usually wear these clothes you know,” he told me as he pulled at the collar of his plaid shirt and eyed the photos of his ancestors in white tunics. “In the jungle I wear my tunic, but I don’t like to leave wearing it because I might get problems from other indigenous groups.”

Land conflicts are commonplace in Chiapas, and when the Lacandon Maya were given 614,000 acres by the government in 1971, other groups, previously encouraged to move to the land by the government, were notoriously unhappy about it. Since then, numerous legal challenges have been made on the land.

The next time I would see Daniel was a week later at a dusty crossroads on the edge of the jungle. This time it would be my turn to feel uncomfortable. He was confident and calm in his surroundings, a stark contrast to me, a self-proclaimed urbanite. Daniel is a tour guide who leads visitors into the jungle to explore lost Maya cities, to learn about the medicinal plants and sacred trees or to raft down the powerful waterfalls that run near his village. I was there on book research and had asked him to take me to visit the ancient Maya city of Lacanja, a place I believed might have been a spiritual site prior to the arrival of missionaries to the area.

As we started our trek, Daniel was quick to tell me that his home is disappearing. Some estimates suggest that only 10% of the virgin rainforest remains, after huge deforestation caused by cattle farming and logging in the area. Only 60 years ago Daniel‘s ancestors had lived in virtual isolation, deep in the rainforest. Before 1957, when a US Baptist missionary arrived and built a landing strip in Lacanja Chansayab, visiting the village – which was then more like dispersed dwellings in the jungle – would have involved a few days’ trek from an airstrip much further away.

Now the community “has more churches than people,” he told me with a chuckle.

The original religious traditions of his people are no longer spoken about. When I probed for information about pre-Christian practices, Daniel had no information for me. “I ask my grandmother to tell me about it all the time,” he said apologetically, “but she says it is sinful and won’t speak of it.” Unlike the other group of Lacandon Maya further north in the jungle, southerners like Daniel’s family were converted to Christianity and next to nothing remains of their spiritual ancestry.

Today, the Lacandon rely on tourism to sustain themselves, some building cabins for visiting travellers, and many, like Daniel, are now certified rafting guides. Daniel lives in a humble wooden house, speaks Maya and eagerly awaits the rainy season when he can catch chameleons that fall out of trees to eat with his family. Yet the village shop sells Coke, he owns a car, his children resist speaking Maya and want to cut their hair and Daniel knows almost nothing of the nature gods of his forefathers.

Daniel’s spiritual connection to the land was not in doubt, however, as he traversed the forest the way I traverse London’s underground system at rush hour; almost on autopilot with a self-assured fearlessness. The jungle hummed to a beat of clicking cicadas, buzzing insects and exotic birdcall, and the air was thick with humidity. While his only fear is snakes, Daniel told me, biting ants were the most immediate problem we faced that day. Daniel and his five-year-old son, Brayan – who joined us for the trek – spotted them far before I did.

“Quick. Stamp. Ants!” Daniel shouted in Maya and then Spanish, slapping them off his legs before they could bite him. I stamped hard and sped up my pace.

Daniel stopped regularly to point out the medicinal trees and plants of the forest: the poisonous Chechem tree that can always be found within 100m of its antidote, the Chak tree; the plant that burns warts from the skin; and the tree with a resin used to heal the wounds of childbirth. When we reached a tree with sap so sticky it is used as glue, Daniel took off one of his Crocs – a new addition to the jungle that all the Lacandon people were wearing – to show me where the shoe had ripped at the front and he had stuck it back together.

After about two hours being guided effortlessly through the jungle, we came face to face with the La Ciudad Perdida de Lacanja, the Lost Maya City of Lacanja. Trees and vines intertwined with the stones and a plethora of colored mosses covered the structures. Even though archeologists first visited the site in the 1930s, it has never been excavated and retains a mystical feel, heightened by its position deep in the jungle. The structures boasted strong archways and a solidity that is testament to the Maya’s ingenuity in construction. A large block of stone with Maya writings remained at the site, which Daniel posed by for me to take a photo. We explored the different edifices as Brayan ran around, circling the archways as if at a playground. When I asked about the history of the site and what it was once used for, Daniel appeared to know very little, not claiming any real link to the Maya.

Daniel is certainly straddling two worlds, the ancient and the modern, and yet he can’t quite seem to find a comfortable place in either. He must maintain traditions to sustain himself through tourism and yet he must also embrace the modern for the very same reason. I wondered if the only thing that feels authentic to Daniel is his obvious connection to the jungle.

The light started to fade and I was increasingly worried that we needed to hurry to get back to the village before nightfall. “Trust me,” Daniel said. “I know the jungle, you can relax.”

Sure enough, we made our way out of the trees with plenty of time for Daniel to take me to his village’s small restaurant, where he checked Facebook on the one shared computer, hoping that more tourists will be headed his way.