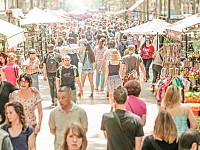 International visitors in Spain spent 73.124 billion euros in the first eleven months of 2016, an increase of 8.4% over the same period in 2015, according to EGATUR, a survey of foreign tourists spending, released by the National Statistics Institute (INE).

Without counting the month of December, the figure has already surpassed the figure for 2015 when 68 million visitors in Spain spent 67.385 billion euros (6.8% more than in the previous year), overcoming the historical record for arrivals for the third consecutive year.

From January to November, the United Kingdom was the country with the highest overall tourists spending, with 21% of the total and an expenditure of 15.336 billion euros, 12.2% more than in the same period in 2015, and without being negatively impacted by Brexit.

In addition, in the first eleven months of 2016, the main destination communities with the highest total expenditure are Catalonia (with 22.4% of the total), the Canary Islands (18.7%) and the Balearic Islands (17. 6%).

As in October, these results show that there are still no negative effects on spending by British tourists in Spain post-Brexit, although they are still shortening their stay in the country.

In November, the total foreign tourists spending amounted to 4.195 billion euros, an increase of 8.3% over the same month the previous year.

Average spending per tourist stood at 1,023 euros in November, with an annual decrease of 0.8%, while average daily spending increased by 6.5% compared to the same month in 2015, amounting to 138 euros.

The average trip by international tourists lasted 7.4 days in the eleventh month of the year, a decrease of 0.5 days compared to the same month in 2015.

The main destination communities with the greatest foreign tourists spending in November are the Canary Islands, with 31.3% of the total, Catalonia (23.4%) and Andalusia (13.6%).