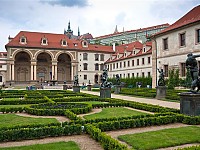 With endless antique and historic sights to behold and a somewhat magical atmosphere Prague is one of the European cities most tourists – whether from the Old Continent or overseas – dream of visiting, especially since the Schengen Area was created. These tourists will certainly be happy to know that in spite of its magnificent beauty, Prague is actually one of the cheapest cities to visit in Europe, at least as far as accommodation costs are concerned, it falls surprisingly into the category of cheap trips.

The findings come from a recent survey conducted by TravelMag.com. They compared hotel prices in forty of the most popular destinations in Europe during September, the busiest month for tourism in the continent and only central hotels with a three-star rating and overwhelmingly positive reviews were included.

While Prague isn’t actually the cheapest European tourist destination featured – that would be Kiev, where the cheapest room in a central three-star hotel costs €29 per night – Prague’s €38 per night in a simple double room earns it a place among the five cheapest cities in the continent, beating Budapest, where the cheapest hotel room costs €39 and only being beaten by Bucharest, Sofia and Kiev.

While the historically beautiful cities of Eastern Europe are a feature on the lower end of the table, the big, modern, cosmopolitan cities from Europe’s core are at the very top. Milan, one of the world’s most fashionable cities, for instance, is the most expensive, since the cheapest room available costs a whopping €135 per night. Specialists say the price may have been slightly inflated by Expo 2015, but with all kinds of events happening in the city at all times, it isn’t likely one would ever find bargain prices there.

Rounding up the top 5 most expensive cities are Stockholm, where one has to fork out €133 for a night at the cheapest three-star hotel, Munich, where a room costs €127, Amsterdam with €119 and Zurich, at €116 a night.