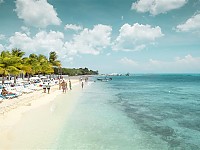 Following the US presidential election, there will be a slowdown in the rate of international tourist arrivals in Mexico, which will grow by only 7 per cent per year, according to estimates by Anáhuac University and the National Business Tourism Council focusing on the outlook of Mexican tourism.

Just before the elections on November 8 last year, Francisco Madrid, a tourism specialist, asked industry bosses whether Mexican tourism would be adversely affected if Trump won the election, and 54 per cent answered yes.

Then came the unexpected election result and now, according to Madrid, the perception has not changed and more than half of the businessmen continue to watch as the Republican tycoon causes the peso to depreciate against the dollar and threatens to stop the automotive boom while seeking to re-examine the North American Free Trade Agreement.

“Trump is not going to say anything different, nor is he likely to change his position. The issue of the wall seems dubious to me, but it can indeed affect (Mexican tourism); the uncertainty is about the medium and long term,” lamented Madrid, who is also Dean of the Faculty of Tourism and Gastronomy at Anáhuac University.

According to the estimates made by Anáhuac University in collaboration with the National Business Tourism Council, in 2017 there will be a 2 per cent annual reduction in the number of tourists residing in the country who will travel overseas by air.

“What (uncertainty) generates is a kind of curb on expectations and the best reaction is to ask for time to reflect and to cut spending. We’re right there now, and that’s how the world is when there are periods of risk and movement in the exchange rate and interest rates. Logic dictates that you stop and ask whether you should stop the vehicle, whether you should interrupt the journey,” said Luis Barrios, president of the National Association of Hotel Chains.

For the entrepreneur who also runs City Express Hotels, this is the turning point, so it will be crucial to know what Trump will do as president.

Enrique de la Madrid, head of the Tourism Ministry, acknowledged that the federal government needs to explain to the general population the challenge he faces in 2017, including Trump’s effect on the economy and Mexican tourism.

“Today, that economic model of globalization and integration that Mexico adopted 35 years ago is being challenged by none other than the world’s largest economy. That’s the challenge,” he declared.