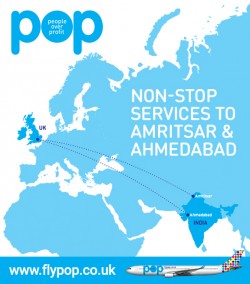 POP, the new low-cost, long-haul airline in the making, plans to operate non-stop flights from the UK to Amritsar and Ahmedabad in India.

Currently flights between the UK and India are predominantly between London Heathrow and just two main destinations, Mumbai and Delhi, and three supporting ones, Bangalore, Chennai and Hyderabad.

There are also a number of indirect UK to India routes through the Middle East.

This ignores the important ‘secondary cities’ of India that would undoubtedly benefit from point-to-point flights from the UK.

There is a growing demand for such a route driven by India’s increasing prosperity, rapid urbanisation and industrial development, and not least by the growing aspirations of its population.

Additionally, POP’s unique business model will put ‘People over Profit’ by donating 51 per cent of its profits to charities in the communities that it serves.

Nino Singh Judge, chairman of POP, commented: “POP is different – it is going to be a UK airline whose DNA is Indian.

“The Punjabi and Gujarati communities in both the UK and India historically have had strong family and business connections and that desire for both communities to keep in touch and visit each other has not abated over the years.

“Add to that India’s booming economy and the rise of the middle classes – including the expansion in their numbers, their larger disposable income, their increasing spending power and their insatiable desire to travel all means there are vast numbers of potential passengers waiting for an airline like POP to offer them the opportunity to fly.

“Combine the fact that passengers are contributing to the improvement of their own society in both the UK and India – perhaps even helping a village or an individual known to them personally – means there is an excellent chance for POP’s two proposed routes to Amritsar and Ahmedabad of being a great success.”

It is hoped the first POP flight will take over later this year.