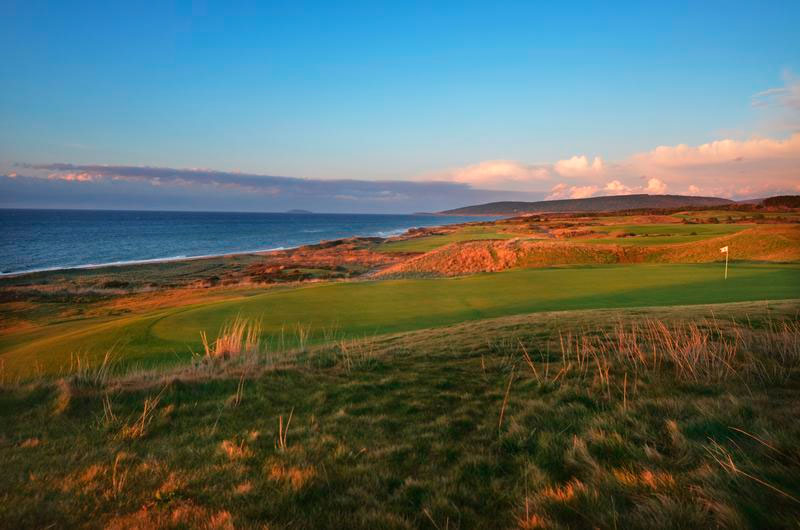 INVERNESS, Nova Scotia (AP) — Ribbons of manicured turf weave through dunes land, connecting the shore of the Gulf of St. Lawrence to the higher elevation of town in this remote corner of Cape Breton Island. Here, a 21st century golf destination has been conceived, inspired by the venerable links courses of Scotland. There is an adjacent pub with samplings of single-malt Scotch, but no motorized golf carts or beer wagons on the course itself.

It’s not cheap – up to almost $200 a round during the summer – and the drive from the airport in Nova Scotia‘s provincial capital of Halifax is almost 200 miles (320 kilometers). Even so, Cabot Links has been ranked among the world’s top 50 courses since opening in 2012, and it could be surpassed by a second 18 holes next door – Cabot Cliffs – that is scheduled to debut later this year.

“Some of the best experiences and some of the best properties are off the beaten track,” says Andrew Alkenbrack, Cabot’s general manager and veteran of international tourism. “Good things are worth the effort.”

If a late summer afternoon last season is an indication, that’s true. A squall stays offshore and gives way to a freshening breeze and sunshine, creating a silvery mosaic on the surf. Soon, Bryan Sutherland, the local school’s physical education director who moonlights as a caddy, arrives on his bicycle. The temperature hovers in the high 60s F (20 C), and the first tee is open.

What we proceed to do next is claimed to be one of the few true links golf opportunities in North America. Though many courses bill themselves as “links-style” – rolling terrain without tree cover and perhaps next to a body of water – purists believe the land must be waves of sandy hillocks that connect, or “link,” a beach to more tillable areas farther inland. In this, Cabot Links complies, just as do its older cousins across the Atlantic.

Level lies are few. Off the fairway, knee-high brush, Queen Anne’s lace and colorful Joe-Pye weed are not. Though rain is plentiful, the grass drains quickly, rewarding low running shots. The wind confounds and confuses, but the patient advice of caddy Sutherland succeeds if followed. The pace of play is steady but not strenuous. The sky, the distant bluffs and the rhapsodic sound of the sea merge in the background.

A “putt” of 100 feet (30 meters) or more is not uncommon, given the lack of demarcation between fairway and green. Bunkers seem to be sculpted by nature, not a bulldozer. Dunes remain as they might have been when there was no golf, even if that produces a blind shot to a landing area behind them. The par-4 finishing hole is downwind and fast, dictating a 130-yard (118-meter) “chip” that bounces the entire length before barely trickling just beyond the green’s back edge. Sutherland is pleased.

Cabot Links sets atop what was once a coal mine, which attracted 19th century immigrants to Inverness. When the coal business disappeared, the village’s future dimmed. That changed when a young entrepreneur from Toronto named Ben Cowan-Dewar began building support in 2005 for a golf destination in Inverness after other such visions failed. Students of golf development will recognize the similarity of Cabot Links to the coastal Bandon Dunes resort in the United States, an even longer drive from the Portland, Oregon, airport than Cabot Links is from Halifax. That is no coincidence. Bandon Dunes’ creator, Mike Keiser, who became a partner in Cabot Links, now is a driving force for the second 18 holes at Cabot Cliffs, along with Masters’ champion Ben Crenshaw – who perhaps is without peer as a traditionalist in golf architecture. Like Cabot, Bandon Dunes is walking-only.

“I think Cabot has brought a new positive atmosphere to our community,” says Sutherland, a sixth-generation Cape Breton native of Scottish descent. “It is such a pleasure to enter the Cabot premises and see the smiling, welcoming faces of our young people.” About 200 residents are employed for golf operations, three restaurants and a well-appointed lodge with minimalist exteriors that blend into the landscape.

Guests of the lodge benefit from reduced green fees and the new golf option of Cabot Cliffs may encourage longer stays. The lodge has expanded during the off-season and bookings for 2015 are brisk, given the buzz created by The Golf Channel and others about the Cliffs. The formal opening of Cabot Cliffs will be in 2016, but it will be playable on a “preview” basis by July this summer.

“I believe the two courses will complement each other,” says Joe Robinson, the resort’s director of golf. “Cabot Links will never be an ‘ugly sister.'”

He describes the new course as “two courses in one.” The front nine has a “true links feel” near the beach like the older course, but the back nine “will be wild in the wind as it winds its way up the hillside culminating with the drama of the closing holes along the cliffs” – hence, the new course’s name.