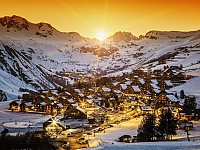 At risk in 2016, French tourism ended the year with a slight improvement in hotel occupancy. The positive trend is expected to continue throughout 2017, provided that the most affluent foreign tourists come back to the country.

While 2016 was the worst year for the hotels since 2009, its last four months ended with a 0.5% increase in occupancy, according to the MKG study, which is good news for the French tourism industry.

The improvement is only modest since it is based on the results of 2015 which reflected the terrorist attack of November 13th. However, the reversal of the downward trend is expected to continue in 2017 especially in Parisian hotels dependent on the foreign visitors the most. The domestic tourism remained stable in 2016 throughout the country.

According to Atout France, the French tourism board, the decline in the number of international visitors should ultimately reach -5% and -7% in 2016. The total should not fall below 80 million compared to 85 million in 2015. The target of the government to welcome 100 million foreign visitors in 2020 does not seem, at the beginning of 2017, out of reach.

French tourism industry is an important source of revenue for the national budget; it generates just over 7% of the GDP. The industry provides jobs for 2 million people and has the capacity to create many others.

Among the visitors who came in lower numbers were especially Americans and Asians who are very sensitive to the security issues. The declaration of the state of emergency did not help the perception of terror threat among potential tourists. The state of emergency was prolonged until July.

In March, a travel market for foreign tour operators is organized under the title Rendez-vous en France. Nearly 1,000 tour operators are expected to attend which is good news at a time when various marketing campaigns have been launched to promote Paris and the Provence-Alpes-Côte d'Azur region. Experts believe that the travel market might further boost the French tourism. Several niche industries are to be developed more this year, including river tourism and green tourism.