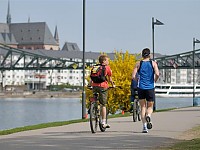 Frankfurt is becoming a sports tourism hub in Germany.  It is home to several important sports associations such as the German Football Association and the German Olympic Sports Confederation. Moreover, the city is also the host of some of the world's biggest events including the Ironman European Championship and the Frankfurt Marathon.

Ironman is the toughest triathlon in the world and the qualification competition for the world championship held in Hawaii is coming to Frankfurt on July 3rd. On that day, 2,300 athletes from 55 different countries as well as many sport fans are expected to come. The Frankfurt City Triathlon comes next on August 7, which is yet another popular event boosting immensely the Frankfurt sports tourism industry.

Marathon runners are getting ready for the local version of the race leading through the center of the city along the riverside On October 30, when the 35th Mainova Frankfurt Marathon takes place, the city will welcome 10,000 athletes and all the more fans.

Recreational athletes also have a place in Frankfurt investing heavily in sport tourism activities. Some of the most enticing options include ice skating at the Ice Sports Arena, bouldering and climbing at the T-Hall, a climbing arena, and tennis, squash, and golf at one of the many clubs. Dancing lovers can take advantage of Cuban salsa, U.S. hip-hop, or Argentinian Tango clubs.

Tourists who love sports will enjoy the opportunity of a guided tour combined with sports. The Tuesday Night Skating tour will allow the travelers to traverse the city starting at the Harbour Park. Sight-jogging guided tours are also available. These are adventurous fitness tours that allow travelers to see some of the the most popular Frankfurt sights.