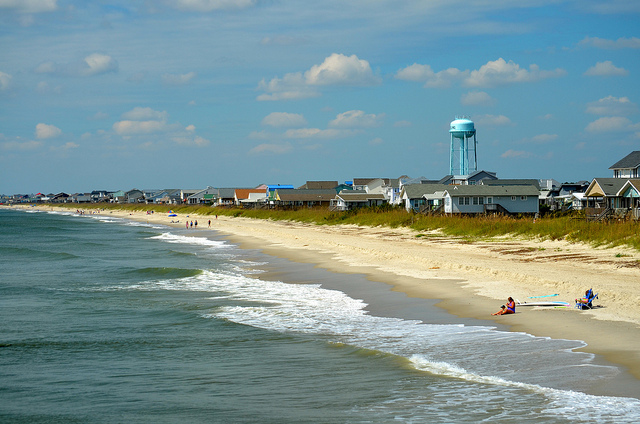 PENSACOLA, Fla. (AP) — Beach towns nationwide are evaluating how best to prevent shark attacks and keep beachgoers safe after a recent string of shark bites off the North Carolina coast.

Officials in that state have been reluctant to close beaches and warn swimmers. In Surf City, North Carolina, where the latest attack occurred, town leaders said they did not believe the threat warranted such actions.

Chris Brewster, chairman of the California-based United States Lifesaving Association, said the decision to close beaches or issue warnings often comes down to the behavior of the sharks. If the sharks are exhibiting any unusual behaviors such as congregating close to shore or hanging out in areas they typically aren’t seen, then closing a beach and issuing warnings might be a good idea, he said.

“It is all pretty logical stuff. Everyone needs to accept the reality that it is the ocean and sharks live in the ocean. Your chance of actually getting bitten by a shark is infinitesimal. It is reasonable to be prudent, but it is not reasonable to be so anxious that you stay out of the water,” Brewster said.

The director of the International Shark Attack File at the Florida Museum of Natural History agreed. George Burgess’ advice to North Carolina is to close the beach after an attack until the shark has had time to move elsewhere.

“In the case where two very nasty bites occur in close proximity to each other, the prudent thing to do is to close the beach,” he said.

In the past two weeks, four people have been bitten by sharks off the North Carolina coast. On June 11, a 13-year-old girl suffered small cuts on her foot from a shark bite at Ocean Isle Beach. Three days later, two separate shark attacks occurred within 90 minutes at Oak Island, N.C. Both victims, ages 12 and 16, had an arm amputated after the attacks. And Wednesday, an 8-year-old boy suffered minor injuries on his lower leg, heel and ankle when he was bitten by a shark.

“A sea turtle is like a potato chip for a bull shark. They love them, and they follow them,” he said.

In Florida, Volusia County on the East Coast is home to New Smyrna Beach, known as Florida’s shark bite capital.

Tammy Marris, spokeswoman for Volusia County Beach Safety and Ocean Rescue, said most shark bites there are not a big deal.

“Over 90 percent of our shark bites in Volusia County are so minor that we treat at the scene,” she said.

In most cases, the bites are from small sharks feeding on bait fish, she said. So far in 2015, the county as had four reports of shark bites, none serious or life threatening.

“We don’t close the beach for shark bites, but we have 47 miles of beach, and it is fully guarded by lifeguards. If we happen to see a shark close to shore, we call people out of the water,” she said.

The county also has restrictions on shark fishing near the shoreline. Marris said fishermen must yield beach areas to people who are swimming or snorkeling. Because of this, there is less of a risk of sharks being lured close to shore by bait.

Brewster, who spent 13 years as San Diego’s chief lifeguard, said a sign alerting swimmers to sharks in the water is often the best public safety option.

San Diego lifeguards also depend on helicopters to track shark activity. The town of Seal Beach, California, made headlines recently by using drones to monitor sharks.

Marris, Brewster and other experts said the most important thing is for beachgoers to use common sense, pay attention to lifeguards and understand that when they enter the ocean they are in a strange environment.

This article was written by MELISSA NELSON-GABRIEL from The Associated Press and was legally licensed through the NewsCred publisher network.