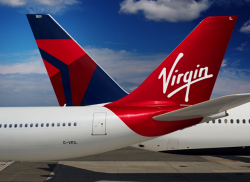 Delta Air Lines and Virgin Atlantic Airways will expand their partnership between the U.S. and U.K. next year with the introduction of Delta’s daily nonstop service from Philadelphia to London.

“Delta remains committed to enhancing the customer experience as part of our joint venture with Virgin Atlantic,” said Jeff Lobl, Delta’s managing director – Network Planning and Alliances. “The addition of Philadelphia to London Heathrow service provides passengers with more choices and greater access to the U.K. from the U.S.”

The service between London and Philadelphia is another step by Delta and Virgin Atlantic to strengthen their network between the U.S. and the U.K. Passenger choice was enhanced last month when Delta began operating one of Virgin Atlantic’s two daily Los Angeles-London Heathrow flights on the same day Virgin Atlantic started serving one of Delta’s three flights between Heathrow and its largest hub in Atlanta. Delta also began nonstop service from Seattle to London Heathrow in March this year.

Delta currently serves London Heathrow from seven cities in the U.S. – Atlanta, Boston, Detroit, Los Angeles, Minneapolis, New York and Seattle – and will add an eighth city when it begins operating a daily flight between Newark and Heathrow in March 2015. Philadelphia will be Delta’s ninth city with service to Heathrow. Customers can also fly direct to London Heathrow from Miami, San Francisco and Washington–Dulles through Delta’s partnership with Virgin Atlantic.

Delta’s Philadelphia-London service will be operated using a Boeing 757-200 aircraft with 164 seats. Passengers travelling in the BusinessElite cabin will enjoy fully flat-bed seats and a range of dining options. Additionally, throughout the aircraft, all passengers will have access to on-demand in-flight entertainment.

To date, more than four million people have flown on the Delta-Virgin Atlantic partnership.