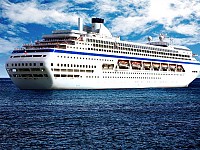 The cruise industry in Europe has been experiencing significant growth for many years now. Especially in Germany, where there is the largest cruise passenger base. The country economically benefits the most from the cruise boom.

Last year nearly 6.6 million Europeans bought a cruise – 3.1 percent more than the year before, as announced by the CLIA (Cruise Lines International Association).

Just behind Germany there is the United Kingdom and Ireland with a combined market share of 27.2 percent. Then comes Italy, France and Spain. These large European countries represent 83 percent of the cruise industry market.

In an extensive analysis, the association examined the costs and values related to cruise tourism. The result was a sum of almost 41 billion euros. This includes not only direct costs of shipping companies, passengers and crew, but also taxes and indirect effects. As a whole the cruise industry in Europe creates more than 360,000 jobs.

Shipyards and their suppliers are also among the big winners of the boom. Overall, the cruise business brings Germany direct revenues of about 3 billion euros. In Europe, only Italy (4.6 billion euros) and the UK (3.3 billion euro) benefit more from the current cruise industry boom.