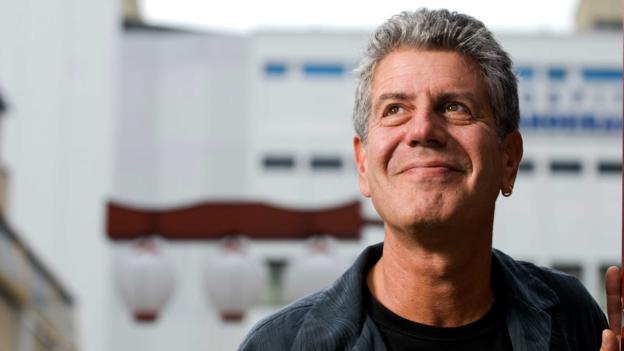 More than 15 years in, Anthony Bourdain is still the king of TV travel. His show Parts Unknown – in which food, travel, politics and sex sizzle together – has delivered dynamite, nuanced episodes on Iran and Lebanon, Mississippi and Houston, Tokyo and many more places.

Now, the author of New York kitchen tell-all Kitchen Confidential is back with Appetites, his first major cookbook in more than a decade, co-written with food writer Laurie Woolever. Bourdain might now be a dedicated father of a nine-year-old, but his hunger for food and travel is undiminished.

Impassioned and perceptive, Bourdain doesn’t disappoint in his interview. We talk about Persian chicken, interviewing Obama in Vietnam and the sauces of Oaxaca, Mexico.

Q: Tell me about a particular food or meal that changed your perception about a place?

So many. The first time I had really, really good sushi in Japan. That was a moment of enlightenment. My first bowl of laksa in Borneo, or pho in Vietnam. I think the sauces of Oaxaca, Mexico, certainly gave me an understanding of how old and deep and complex and criminally overlooked and underappreciated Mexican cuisine is.

It’s an amazing country, and one that everyone should visit, and not just for the delicious food. I just got back from a week in Oman, and that was an incredible country, too. It would change a lot of people’s views in a really dramatic way if there they were fortunate enough to visit up close and see what life in an Islamic country can be.

I hope you get to see the Rome episode we just did. I think it’s our finest work. It’s a very personal and heartfelt one, one of the most technically accomplished and beautiful episodes we’ve ever done. I’m very proud of it.

It would change a lot of people’s views in a really dramatic way if there they were fortunate enough to visit up close and see what life in an Islamic country can be.

Q: Understandably. Another of your important episodes is Iran. Can you tell us about the hospitality you encountered there?

Iranian food is extraordinary, hearty and unpretentious. Fesenjan, Persian pomegranate chicken, is but one example. This in a culture where custom demands you always prepare and offer more good food than can possibly be consumed. What makes Iran special is the complexities, the history, the contradictions – and the everchanging political realities. The people you meet in the street are overwhelmingly welcoming.

Q: “Good food, good eating is all about risk” and “Your body is not a temple, it’s an amusement park. Enjoy the ride” were two of your memorable lines in Kitchen Confidential. On the publication of your cookbook Appetites, how has your creative instinct changed?

I’ve been living a very different life. When I wrote Kitchen Confidential, I was a guy who had very little money, living in a very insecure situation, spending all of my waking hours in this submarine environment with the same group of people. I’d lived within the restaurant industry my whole adult life. I knew almost nothing of how normal people lived. I think that the tone of Kitchen Confidential very much reflected that. I’ve seen a lot of the world since then. I’ve become a father. And of course those things change the way you look at the world, and the way you look at yourself. My new cookbook reflects the sort of food I love making my daughter and her friends.

Q; Is there still a side to Anthony Bourdain that is not so nice?

I can be not nice. In business, I am demanding, I have very specific ideas about the kind of effort I like to see in making my show. I ask a lot of the people who work with me. Those who have been with me some time share the same kind of commitment and creative drive that I do. Somebody does a half-assed job, I have a hard time understanding that. I was a short-order cook for many years, earning minimum wage, or close to it. I didn’t enjoy it, or feel too good about it.

Q: Parts Unknown episodes in Turkey and Russia powerfully show authoritarianism is rising beyond Trumpism, that the world is becoming less friendly to immigrants and travellers.

Look at England, Turkey, Russia. Look around the world. The kind of pressures that we’re seeing in Germany, Scandinavia, everywhere. The yearning for a man on a horse to make everything better quickly. It’s not just an American problem. People are all too ready to give up their freedoms in return for security, or to address what they see as their grievances. It can happen anywhere. It has happened anywhere. It might well again.

Q: In another of the latest season’s outstanding episodes, you interviewed Barack Obama over Vietnamese pork and noodles in Hanoi. What do you think Obama’s legacy is?

I think he exposed a deep strain of racism that exists in my country. And not just here. You’re calling from New Zealand? I spent some time in New Zealand. Everyone there is quite liberal till they’re about four drinks in; people said some pretty appalling things to me on a regular basis. As removed from large continents as New Zealand might be, I don’t feel it’s immune either to our worst or baser instincts.

Like I said before, we just did a show in Rome. Rome is still there. It still survives against all odds, it’s still beautiful. You can still live a good life there. Hopefully we will endure. I do, on balance, have confidence in the human spirit to endure, if nothing else.