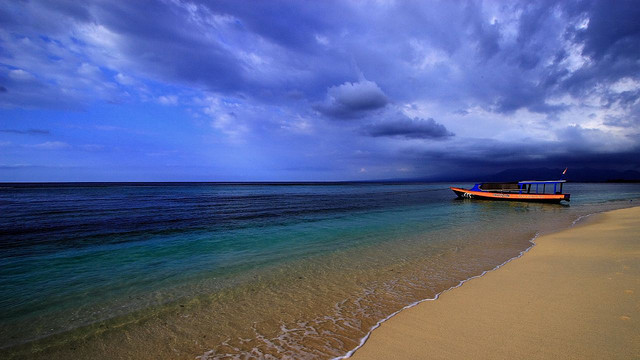 BANDA ACEH, Indonesia (AP) — Ten years after a tsunami hit this city on Dec. 26, 2004, killing 167,000 people, roads and bridges have been rebuilt, there are houses on the beach, trees have grown back, and the millions of tons of debris that covered the island are gone. But for a first-time visitor, reminders of the disaster seem to be everywhere.

A sculpture of a giant wave marks Lambaro, one of four mass gravesites, where 46,000 bodies are buried. A hotel front desk displays a photo of smashed boats filling its parking lot. The dome of a mosque — torn off its building a mile (1.6 kilometers) away — rests in an emerald-green rice field.

Water streams down the cave-like walls of the Tsunami Museum, which serves as both a memorial and evacuation site, with a knoll on high ground offering refuge in case another tsunami strikes. The center of the museum is an atrium that rises above a park, decorated with the word “Peace” and the flags of countries that provided assistance. Exhibits explain how the community worked together to rebuild, and how the once-embattled province even found ways to make peace after the disaster, with rebels in a long and bloody separatist fight signing a deal with the central government.

Almost everyone in Banda Aceh has a story to share. Dara Umarra and her neighbors have in their yards two wrecked boats that came to rest there after the storm. Visitors can climb in one boat, but it's tilted at a steep angle. I couldn't position myself squarely on the ladder and as I dangled from the rungs, I wondered what it was like trying to cling to anything stable to survive the waves.

A massive, 2,500-ton steel barge that housed a floating diesel power generator, the Apung 1, was carried 5 kilometers (3 miles) inland. Walkways and five flights of stairs leading to a viewing tower allow visitors to appreciate its sheer bulk. A monument outside the barge honors victims from the immediate area. A copper-colored sculpture, symbolizing the height and color of the massive waves, surrounds a clock tower where time is stopped just before 8 a.m., the moment when the earthquake struck, unleashing the tsunami.

One of the most-visited sites is a long fishing boat that crashed on top of a house. A ramp leads to the roof, and you can also walk underneath where it's wedged between two dwellings. The boat provided a refuge for 56 survivors.

Some memorials include photo galleries of the destruction and recovery. They do not attempt to sanitize. Mixed in with photos of debris and rebuilding are graphic images of human suffering.

The Baiturrahman Grand Mosque, with its 35-meter (115-foot) minaret, pearly white walls and seven majestic black domes, survived the tsunami largely unscathed, with hundreds of locals taking refuge there. Visitors can wander through the mosque's pillars and admire the chandeliers, marble floors and architecture. It's beautifully lit at night, and Friday prayers offer a colorful experience. Be aware that the province has implemented a version of sharia or Islamic law, and visitors to the mosque must cover up. Sarongs can be borrowed by those who come unprepared.

While residents tolerate tourists in shorts elsewhere, modest clothing covering legs and shoulders is more socially acceptable. Local women are veiled and dress conservatively. Lumpuuk, a few kilometers (miles) to the south of Banda Aceh, is known for its beaches, but if you're planning on swimming in a bikini, it's best to stick to the area near the cliffside bungalows where most of the tourists congregate.

A short ferry ride from Banda Aceh to the north is the island of Pulah Weh, or Sabang. It's legendary among in-the-know divers, and non-divers can enjoy snorkeling, fishing, hiking and views from hotel balconies. Prices are moderate by Western standards: A spacious upscale bungalow with water view at Casa Nemo is less than $40 a night. The nicest beach near the port is Sumur Tiga, about 20 minutes away, and much of the island is ringed by easily accessible coral reefs. The closest thing to a typical beach town is Ipoih, an hour from port. Sharia law bans alcohol, but some restaurants and beach hotels geared toward tourists quietly sell beer. Organized tourist activities — such as water excursions — come to a halt Friday mornings for the Muslim holy day.

While all the tsunami sites are somber reminders of one of the worst natural disasters in modern history, visitors cannot help but feel Aceh's resilience. A multi-billion dollar reconstruction effort, widely considered a success, has left the province in many ways better off than others in Indonesia, which remains a poor country despite sustained economic growth over the last 10 years. A huge tower inside the museum is engraved with just a few names of the dead, but the dark funnel reaches up to the bright sky.

GETTING THERE: Banda Aceh can be reached from Jakarta and Medan, Indonesia, on Garuda or Lion Air; and from Malaysia on AirAsia from Kuala Lumpur or on Firefly Air from Penang.