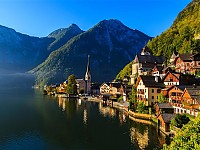 The Alpine republic benefits from many people’s desire to visit nature and escape from the daily bustle. The fresh mountain air also attracts more and more Chinese visitors who travel to Austria in increasing numbers. The authorities expect a positive summer season.

“For years there has been an upward curve and we are once again optimistic,” said the spokeswoman of the “Österreich Werbung“, Ulrike Rauch-Keschmann. In the summer of 2015 (May to October) the country recorded an increase in arrivals of 6.3 percent to 22 million and in overnight stays by 3.3 percent to 70 million.

For stressed people, mountains and nature are a compelling way of disconnecting from the outside world. For several years now there is also generally stronger willingness to spend more money on vacation, as stated by Rauch-Keschmann.

Revenues of the Austrian tourism in the summer of 2015 reached around 11.7 billion euros, an annual increase of 4.3 percent. Germans were by far the largest group of visitors  – followed by the Dutch, Swiss and Italians.

The summer season is also a prosperous period for cable cars. 80 percent of the 253 cable car companies are in operation and provide transport services to the Austrian Alps to about 16 million people who travel to Austria mainly for hiking and other adventure activities.

According to Rauch-Keschmann, tourism development in Austria’s largest cities such as Salzburg, Innsbruck and Vienna is above average. Furthermore, the Chinese are becoming a promising target group. They are not interested in the big cities only, but also in nature.

A publicity campaign under the motto “Nature and Good Air” in Beijing, where smog negatively influences the daily life of many people, had been very successful.

“This way we stroke a chord with the people there,” said the tourism expert. In the summer of 2015 there was an approximate increase of 50 percent of Chinese visitors to the Alpine republic compared to the year before.