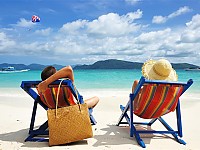 Vacations in Europe have a new attraction: the Euro’s sharp drop in value is making Europe a lot cheaper for tourists worldwide, particularly from China and the United States.

For American tourists, the strength of the dollar translates into an amazing discount of approximately 25% compared with the same time last year. Over the past year, China’s currency has increased by around 20% against the Euro. You can now take pretty cheap trips.

Residents of the Eurozone who are feeling the pinch from their slow economies are more likely to remain inside the bloc, where they will not feel the effects of the currency changes.

Nick Greenfield, head of tour operator-relations at the London based European Tour Operators Association, said that this means the ingredients required for a remarkable year for the tourism industry in Europe are already in place.

The Euro has in recent times decreased in value against most currencies and its drop has been especially marked against the dollar. The policies of the United States Federal Reserve have been strengthening the dollar while those of the European Central Bank have been dragging Euro down. The euro has also been weakened by the muted economic-growth and fears over Greece’s debts.

American travel companies and European tourism officials report that United States bookings to some of the European countries have increased by up to 20% so far.

Lyssandros Tsilidis, president of the Hellenic Association of Travel & Tourist Agents, said that Greece has had a 15% to 20% increase in hotel reservations from the United States, Europe’s biggest long haul tourism market compared to the same time the previous year. Spain has seen a 12% increase in January and nearly 19% in February. Officials expect more growth that they attribute to the dollar’s strength.

Among individual cities, Paris is the top tourist attraction; it was visited by around 2 million U.S. tourists last year. Francois Navarro, general manager of the French capital city's tourism committee said that officials hope to increase that figure this year and encourage tourists to spend more money while the exchange rate is still favorable.

Navarro also said that if trends hold, the American tourist may for the first in around a decade return to the top spot among foreign tourists in the Paris area.

However, Navarro said that a new generation of Chinese tourists is stirring up Paris forecasts. They travel alone, are aged 25-40 and spend on high end restaurants and hotels, unlike the preceding generation that was mainly interested in shopping. And a Chinese tourist on average spends 4 times as much as an American tourist.

The U.S. is also the greatest source of tourists who visit Rome – the city recorded a 7% rise in American tourists in January, compared with the same month last year.

Tourists have a wide variety of options to select from: the Eurozone encompasses countries from Finland to Portugal and from Ireland to Greece.

Priceline, a United States based online travel company has reported that in the first week of April, sales of airline tickets to France were 20% higher than in the same week last year.

Joseph A. Moscone, Booking.com senior-manager for public-relations in the Americas’ Europe is now competing for American business with the popular tourist destinations in the U.S.

Booking.com compared this year’s room prices in Berlin, Barcelona, Paris, Rome and Amsterdam with last year’s prices, using the Euro dollar exchange-rate in March 2014 and last month. The company concluded that the average price in US dollars for one night in a four star hotel in the above cities is 21% lower, and down 17% for five star accommodation.