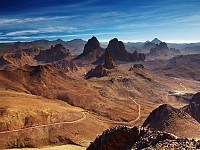 The Algerian Ministry of Tourism announced new measures to boost Saharan tourism. After five years, for instance, the eastern part of the Hoggar Mountains, Assekrem (Atakor) and Tefedes, will be reopened to boost Algerian tourism during the winter season.

Most western countries, notably France, formally discourage their citizens from traveling to most of the Algerian Sahara. Classified as the red zone, an immense area of the national territory is de facto inaccessible.

Majority of French tourist agencies don’t organize any tours in Algerian Sahara. “Clearly, as long as the south of Algeria is in the red zone, there is no question of offering tours in this area. Whether it is our legal responsibility, or the safety of our customers, this is our policy,” summarizes an official of the Allibert group.

On the other hand, a few agencies still offer tours in the south. “We have never deserted our bond of trust with local agencies and local partners. They have nothing to lose or to gain by taking the slightest risk,” says the representative of the French agency Tamera.

Since 2010, the security problems and lengthy procedure of gaining visas have meant that Algerian tourism in the Sahara Desert is losing many potential visitors who are quite rare in the area.

Delays of two months or more are not uncommon when obtaining visa for Algeria. The whole procedure is long and costly. Many foreign tourists rather choose more accessible and less expensive destinations.

The Ministry of the Interior and the Ministry of Foreign Affairs recently announced that they will consider ways to simplify the visa application process.