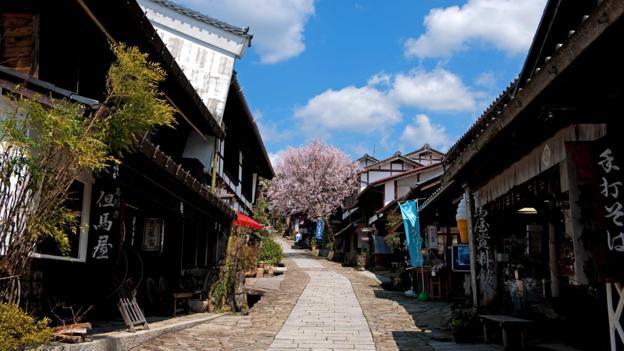 At the trailhead, under the shadows of towering pine trees, a large sign warned of bears. At Yellowstone or Yosemite in the US, this would have been unremarkable. But I was in Japan, the land of bullet trains, and endless neon vistas. I had come prepared to face challenges with crowds, language and high prices. But bears? What was a visitor to do?

“Please have a thing out of the sound,” recommended the first trail sign, under a picture of an angry-looking bear and some Japanese kanji characters that presumably explained what the translator had meant. I was either supposed to make a lot of noise or no noise at all. My survival might depend on it, here in the heights of Japanese bear territory.

I was hiking a segment of the Gokaido, a network of trails first developed in the 8th Century connecting the capital of Edo (Tokyo) with regional towns from Tohoku down to Kyoto. The trail network reached its most-trafficked period during the 17th to 18th Centuries, when the Shogun rulers in Tokyo used it regularly, accompanied by their retinues of samurai warrior guards, giving the paths their unofficial moniker as the “Samurai Trail”.

While most parts of the Gokaido network have either been turned into modern highways or lost to the past, the Nakasendo Trail (literally the “Central Mountain Route”), remains in sections similar to how it was in the Shogun era. To hike parts of its 500km route through forests, mountains, farms and small villages is to experience something of old Japan, with well-preserved traditional towns, family farms and a surprising amount of wilderness, just a few hours by train from the megalopolis of Tokyo.

Assuming I dodged the bears, my first stop on my four-day, 40km hike would be the old “Post Town” of Magome, a designation that came in the 17th Century from travelling samurai and government officials who posted their luggage ahead with their retinue to each town along the path. Farther north, in Tohoku, the historic Post Town of Ouchi-juku provides a similar Samurai-era experience.

As we hiked up the dirt path into the hilly forest, crossing streams and passing rock formations and the ruins of ancient shrines, I was struck not so much by the natural beauty, but by the silence. It’s never quiet in Japan. The absence of loudspeaker announcements, rumbling trains and chattering crowds seemed ominous. Especially with those bears looming.

Fortunately, at a trail crossing, a large bell hung from a wooden frame. Beneath it, a sign in English instructed readers to “Ring the bell hard against bears”. While this doesn’t quite mean what the translator intended, it at least solved the mystery as to whether we should hike quietly or not.

We shuffled on noisily along the trail, past waterfalls and along boardwalks through amazingly tall groves of bamboo. Several times we passed small groups of old Japanese women wearing sun hats, smocks and sandals, carrying bamboo baskets and jingling with the multiple small bells they had affixed to their outfits to ward off bears. They giggled when we greeted them in basic Japanese. But aside from these intrepid picnickers, few other hikers (and no bears) ever crossed our path. It was a surprising bit of alone time in modern Japan.

We soon started seeing a fabulous cornucopia of bounty from family-run farms. Huge eggplants on the vines shone metallic purple like waxed cars. Mandarin oranges, red peppers and bright green limes sprouted in a rainbow array of carefully tended gardens. And everywhere there was rice. Terraced fields of short green shoots, mature swaths of longer yellow stalks and harvested brown husks drying on wood frames, the scene looking like something from old samurai movies that had been colourized almost too vividly.

Near the farms, women sold fruits and vegetables out of crates, while unmanned tables topped with bags of citrus fruit and bundles of flowers had signs saying “100 yen for anything”, with a can for honest hikers to leave some change. Dogs and cats strolled from tile-roofed, wood-beamed homes and sidled up to strangers for a pat on the head. Modern mini-tractors added a contemporary touch, as did the scarecrows with Mickey Mouse heads. Still, the friendly, small-town vibe made it feel as if the area had been unchanged for centuries. As travellers had done for hundreds of years, we stopped at a roadside teahouse for a drink and a snack, the dark wood interior blackened from generations of use of the wood-burning stove.

Upon arrival in Magome, I imagined myself a visiting samurai surveying my domain, inspecting the water wheel by the old granary, checking out the local artisans at work and clapping my hands in prayer in the shadows of the temple gate. I also saw myself patrolling the edge of town, where a large wooden sign with painted calligraphy still warned visitors as it did in the 1700s about regulations, including the set fees for porter services and a ban on tree cutting and carrying weapons.

After dinner – a multicourse kaiseki-style meal with meticulously prepared but tiny helpings of meats, vegetables and fruits ­– I strolled down Magome’s steep cobblestone main street illuminated only by hanging lanterns and a full moon. I walked past two-storey wood-and-paper homes, recreations of the originals, which had hosted centuries of nobles but couldn’t survive town fires. By 7 pm, the village was completely closed for business, devoid of pedestrians and blocked to car traffic.

Back at my family-run minshuku inn, wearing traditional yukata robes and wooden geta sandals, my evening concluded with a soak in a steaming hot bath. Here in this Post Town along the Nakasendo Trail, sleeping on my futon rolled out on the tatami mat floor, it was easy to slip into samurai dreams.