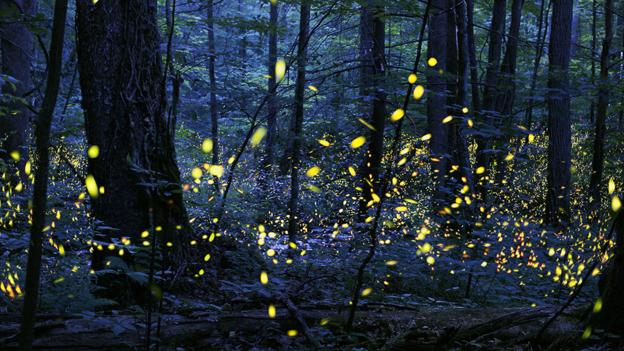 Although there are about 2,000 species of fireflies in the world, synchronous fireflies ­– ones that can coordinate their flash patterns ­– exist in just a handful of places on Earth. And to see their most dramatic light display in the western hemisphere, you’ll need to head to the US, to the Great Smoky Mountains National Park.

“We have 19 species of fireflies in the Smokies,” said Becky Nichols, a park entomologist who has studied the phenomenon for the past 20 years. “They all have their own individual flashing pattern, but Photinus carolinus is our only synchronous species.”

Four species of synchronous fireflies can also be found in the jungles of Southeast Asia (particularly in Malaysia, Thailand and the Philippines), but “they don’t fly and flash the way they do here,” Nichols explained. “They [fireflies in Southeast Asia] perch on trees and flash. And they’re completely synchronous,” meaning they flash both on and off together, as opposed to those in the Smokies that flash in a wave effect. Congaree National Park in South Carolina has a different species of synchronous fireflies, Nichols added, “but their synchrony is not as dramatic as it is here.”

The most impressive place to catch the light show is in the Elkmont section of the Great Smoky Mountains National Park, which straddles the Tennessee-North Carolina border. This is home to the western hemisphere’s largest populations of fireflies, also known as lightning bugs. The phenomenon only happens during the insects’ mating season, which in the US lasts for a two-week period in late spring. The adult females lay their eggs on or just under the ground, and when the larvae hatch they burrow into the soil, feeding on the organic matter. This larvae stage lasts for about one to two years. Once larvae transform into adult fireflies, they live for only about 21 days – making mating a huge priority.

Each year in mid- to late April, Nichols analyses local temperature data to predict the peak of the mating season – when the flashing displays are most impressive – so the park can schedule its annual eight-day viewing event. The peak depends on various environmental factors. If the previous summer was hot and dry, for example, the mating season is shorter than usual. And a cold winter followed by a wet spring can push the season slightly later in the month. When the effect was first scientifically documented here in 1993, the height of the phenomenon happened in late May. Over time, the peak has shifted to early June.

Environmental factors also affect the brilliance of each display. What’s required, Nichols explained, is a rich duff layer of decomposed leaves and other organic matter so the firefly larvae have plenty to eat, plus a somewhat open area without a lot of shrubbery so the fireflies can see each other easily. And there must be no light pollution. “They need complete darkness for the reproductive phase,” Nichols said. While the fireflies will still usually flash in the rain (unless it’s a complete downpour), misty, drizzly evenings following rainfall can be dicey, and if the temperature dips below 10C, there’s no show.

The national park limits nighttime access to Elkmont during the event, with a total of 6,000 to 8,000 people attending each year (campsite reservations open six months in advance, and parking permits are distributed via a lottery). Many bring folding camp chairs or blankets to the viewing area, but coolers and food are not permitted. Park rangers answer questions and distribute red cellophane for covering torches to minimize disturbance to the fireflies.

The insects wait until it’s totally dark to do their thing, usually starting between 9:30 and 10 pm, although on nights with a bright moon they may hold off a little longer. The males start lighting up in short random bursts from six to eight times for about eight seconds before the night goes pitch black. Then the cycle begins again. As the night deepens, the effect becomes more and more dramatic, with the fireflies blinking in a wave effect that resemble strings of Christmas lights. The show is usually over by midnight.

“Males flash as they fly around,” Nichols explained, “while the females generally stay on the ground and respond with a fainter double flash that has no set intervals. The males see them in the grass and then fly down, and at that point, mating is somewhat competitive. We think the female really needs a large amount of light to elicit her response, and that’s why the males flash in synchrony – to create more of a light stimulus for the females.”

While you can see synchronous fireflies elsewhere in the region, the Smokies offer the most dramatic display. “Pockets of Photinus carolinus exist throughout the southern Appalachians, as far north as the Allegheny National Forest in Pennsylvania,” Nichols noted. But because of habitat destruction and light pollution, she explained, they’re not as numerous or as noticeable in other places. “The Smokies happens to have a really good population of them.”