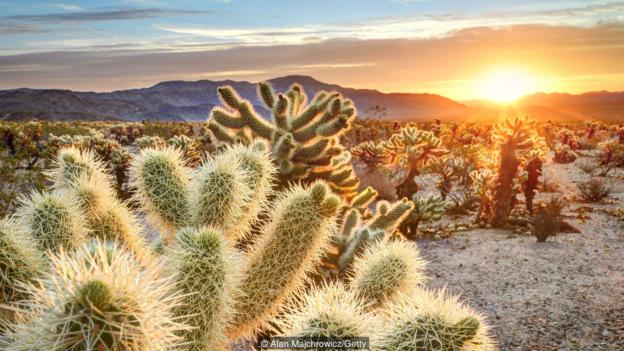 David Pylman looked up at a giant outcropping of tawny granite, a gnarled Joshua tree sat to his right. Pylman watched as his partner of nearly two decades, Phil Spinelli, stood at the edge of a 50ft cliff, looking down, while a man and a woman dangled from ropes.

“See, the most important thing here is rope management,” Pylman said to a yellow-shirted trainee standing nearby.

Pylman and Spinelli watched and coached as the woman simulated a vertical rescue. She manoeuvred the man, who played the part of injured climber, into a body-length rescue basket known as a litter. She slowly and methodically hauled the man down – the pair was training for a real life emergency scenario.

As the co-captain of the Joshua Tree National Park Search and Rescue, a rigorously trained volunteer organization, this is how 70-year-old Pylman spends nearly every weekend.

While most visitors come to Joshua Tree National Park – one of the top climbing destinations in the United States – to see its sparse desert landscape, twisted namesake trees and architectural piles of granite that appear to jut out of nothing, Pylman sees crevices fit for removable anchors called climbing cams and terrain prone to stranding hikers.

About 300,000 climbers come to Joshua Tree National Park each year; in the same time frame, the Search and Rescue team sees around 40 rescues. Many are minor, including injured scramblers, heat exhausted walkers or hikers adrift from trails. Then, there are just under a dozen serious search and rescue cases annually, ranging from fallen climbers to missing persons. In Pylman’s time, three hikers have gone missing for more than a week. One was never found.

His most dramatic rescue was a fallen climber at Indian Cove, a popular climbing campground nestled between towering rock formations. The man was leading a climb, not wearing a helmet, when he took a 15ft fall. By the time Pylman and the team reached him, he was drifting in and out of consciousness. When the climber came to, he was combative, attempting to climb back up the cliff face. He died on the way to the hospital. “It was hard to watch,” Pylman said.

“Dave is absolutely integral,” said Dylan Moe, the search and rescue coordination liaison ranger for Joshua Tree National Park. “He’s got a passion for this field that’s unmatched by 99.9% of park personnel.”

Joshua Tree National Park Search and Rescue is overseen by park staff, but it has more autonomy than most volunteer-operated units. It consists of 38 volunteers as diverse as one would find on a New York City subway: a Marines contractor, a behavioural therapist, a semi-retired geologist, a part-time pilot, an octogenarian rock climber with a physics degree. The team is broken into two components: wilderness high angle technical rescue, and search. The former is a type of rope rescue that incorporates harnesses, belay devices and various hauling implements to aid the injured and helpless. The latter includes specialized units with both human trackers and a small contingent of canine handlers.

Each person has his or her reason for volunteering. For Pylman, however, it started with a rock climbing obsession. When he was in his forties, a friend of Pylman’s told him about rock climbing classes in the national park. Already an accomplished skier and runner, it piqued Pylman’s interest. So, the soft-spoken Midwesterner decided to give it a go.

For about seven years, he drove from Orange County, California, to Joshua Tree nearly every single week. During this period, he developed a group of climbing friends, including the man who would become his search and rescue partner, Spinelli. The pair regularly travelled to training seminars and symposiums around the country.

About 10 years ago, Pylman sold his house, retired and moved out to Joshua Tree full-time. “Coming from Michigan to Los Angeles, I thought there was no way I’d ever live in the desert,” he said. After years of hanging from rocks, overlooking a landscape that is regularly described as reminiscent of the bottom of the ocean floor, the moon or a scene from a Dr Seuss book, Pylman grew an appreciation for the subtleties of Joshua Tree National Park. He admired the magenta blooms on the beavertail cacti, indigo desert blue bells, varying striations in the rock and rare Bighorn Sheep in the distance.

“The desert is a beautiful place when you learn what to look for,” he adds. “You learn to appreciate the little, tiny things.”