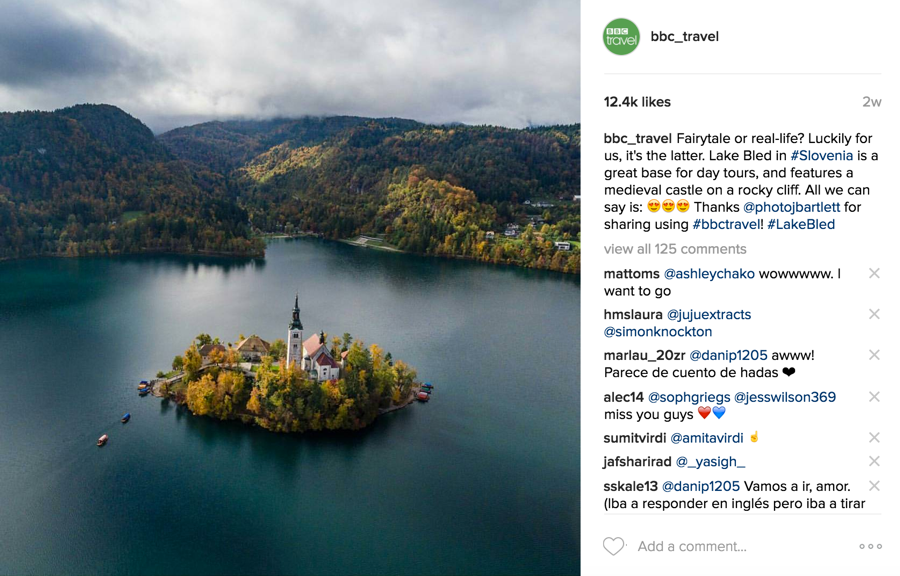 Last month’s top-rated #FridayFeature is from Canadian-based photographer Jeff Bartlett, who perfectly captured the pristine beauty of Lake Bled in northwestern Slovenia. The photo features tear-shaped Bled Island and its iconic Pilgrimage Church of the Assumption of Mary.

The site was originally used by polytheistic pagans as a temple consecrating Ziva, the Slavic goddess of love and fertility. But during the wars between the local pagans and Christians, which ended in AD745 upon their conversion to Christianity, the temple’s altars were destroyed and a church dedicated to the Virgin Mary was built in its place. The current Baroque iteration of the church has stood since the 17th Century.

To reach the island, visitors can take a pletna (a gondola-like boat), row or swim, then climb a 99-step staircase to the church. Those who make it all the way to the upper roof beams will encounter the “wishing bell” – it is said that ringing the bell three times will make your dreams come true. However, there is a caveat: you can only make a single wish.

According to island legends, the bell’s power to grant wishes stems from the tragic story of the widow Poliksena, who lived on Bled Island in the 16th Century. Upon learning of the death of her husband, she gathered her gold and silver and cast a bell in memoriam; however, a terrible storm sank the bell, the boat and the boatmen as it was being delivered. Inconsolable, the widow moved to Rome and became a nun. Upon her death, it’s said that the Pope in power at the time, Pope Clement VII, heard of her misfortune and out of sympathy cast a new bell for her. It was his decree that anyone who rang the bell three times and believed in God would have their wish granted.

Today, however, the island is a happier spot, serving as a popular wedding venue. But even now, traditions prevail: to ensure a long and happy marriage, the groom must carry his silent bride up the 99 steps to the church. It is a reminder of how history still reigns on this island paradise.