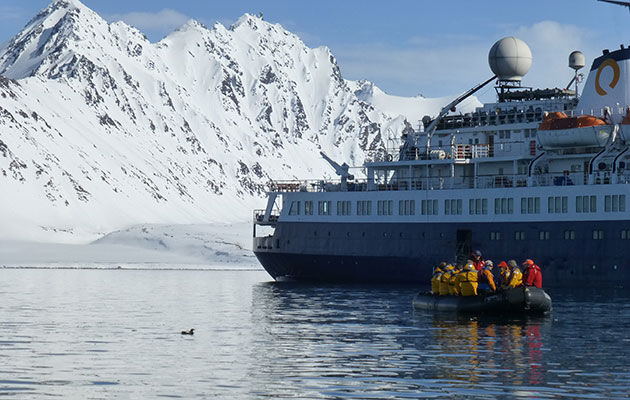 As an independent traveler, I've never been too interested in cruising as a vacation option. Hairy chest contests? Not for me. Casinos and cheesy stage shows? I'll pass. For me, traveling is about experiencing a destination, not cruise ship bells and whistles. And I've never felt comfortable descending upon a tiny island port with a teeming crowd of 2,500 other tourists.

But on a recent trip to Alaska's Inside Passage with Lindblad Expeditions, I realized that there's a whole other side of the cruise industry that's actually ideal for independent travelers like me: expedition cruises.

I sailed aboard Lindblad's National Geographic Sea Lion with only 60 fellow passengers, and the ship's fairly basic amenities — one lounge, one dining room, small cabins — played second fiddle to our experiences of the destination itself: Zodiac landings on deserted beaches, up-close views of calving glaciers, forest hikes led by veteran naturalists, and spectacular views of breaching whales and sleek sea lions. It was everything I didn't know cruising could be.

Think of expedition cruising as “soft adventure.” You'll sail to some of the most remote places on Earth — like Antarctica, the Amazon or the Galapagos Islands — but rather than roughing it in a tent or swatting mosquitoes in a jungle lodge, you'll be based in a comfortable, climate-controlled ship.

The level of onboard luxury varies significantly from expedition line to another, and even between ships in the same fleet. Some vessels have spas, gyms, libraries and internet cafes; others stick to the basics (lounge, dining room, observation deck). Meals are typically served at set times in a single seating, with snacks available in between. Couples, take note: Cabins with twin berths instead of double beds are common on expedition ships.

While modern-day cruise liners have swollen to the size of small towns, carrying thousands of passengers, expedition ships rarely hold more than 200 people — and are often much smaller. (For example, the smallest ship in the Zegrahm Expeditions fleet, a live-aboard yacht called Galapagos Sky, carries just 16 passengers.)

Smaller ships offer a number of key advantages for independent travelers. Most importantly, they can take you where the big ships can't go — like the tiny fishing village of Petersburg, Alaska, whose harbor is too small to accept calls from lines like Holland America and Royal Caribbean. Big ships are also verboten in the Galapagos Islands, where there's a 100-passenger limit per vessel.

Top 12 Animals to Spot in the Galapagos Islands

If you avoid group travel because you hate feeling like part of a herd, expedition cruising is a good compromise. Excursions off the ship are divided into smaller groups, so you'll rarely, if ever, find yourself aboard the dreaded motorcoach. But you'll also enjoy the benefits of traveling with other people — namely, the chance to get to know interesting, well-traveled fellow passengers and staff. By the end of my weeklong Alaska expedition, I was snapping photos of my newfound friends and exchanging email addresses so we could keep in touch after we returned home. 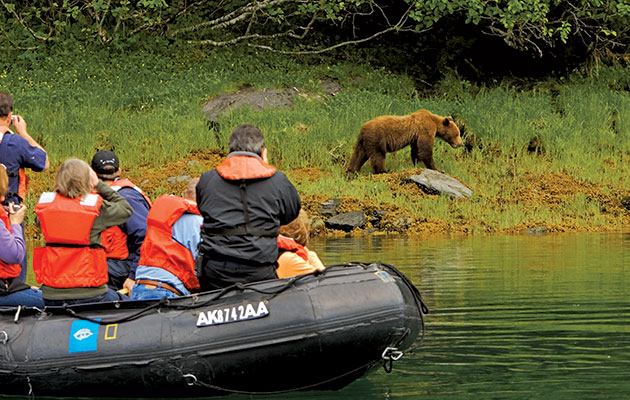 There are some places that you simply can't explore without taking an expedition cruise, such as Antarctica and its outlying islands, or the remote Arctic landscapes where polar bears roam. In other parts of the world, like Alaska's Inside Passage, cruising is a preferable alternative to expensive flights or time-consuming ferries between areas of interest. Even if on-land lodging is available, as it is in the Galapagos, in many places you'll see and experience more if you take a cruise instead.

9 Best Destinations to See from the Water

One key part of any expedition cruise is the emphasis on learning. Expedition cruises are led by biologists, geologists, anthropologists, historians and other specialists who can identify the local wildlife or offer a cultural perspective on the place you're exploring. In lieu of musical productions and nightclubs, evening entertainment often consists of talks by these experts to help illuminate what you've seen during the day. Some expedition cruise lines, including Lindblad Expeditions and Natural Habitat Adventures, also offer photography experts on some or all sailings.

Exploring the Arctic: Hits and Misses from a Svalbard Cruise

Expedition itineraries are typically more changeable and spontaneous than those sailed by mainstream cruise ships. Weather, tides, ice conditions and wildlife sightings can all affect the day-to-day activities aboard an expedition vessel. On my Alaska trip, the ship veered away from its intended route on several occasions to give passengers a closer glimpse of bears on a distant shore or to follow a pod of humpback whales. We also had one or two planned anchorages change when forbidding weather rolled in.

Leave your formalwear at home — you'll need the suitcase space for your hiking boots and parka! On an expedition ship, the atmosphere is informal and relaxed at all times.

9 Incredible Animals to See in the Arctic

The list below is a sampling of the major players in expedition cruising, along with some of the places where they sail. There are many other smaller companies as well, often specializing in a single destination. If you're interested in cruising a particular region, do an internet search or consult a knowledgeable travel agent to find these local alternatives. 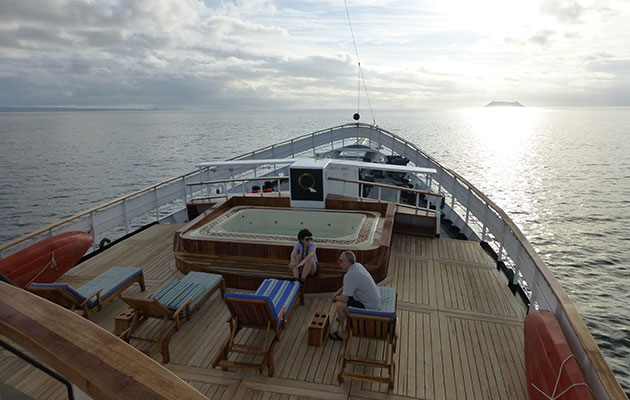