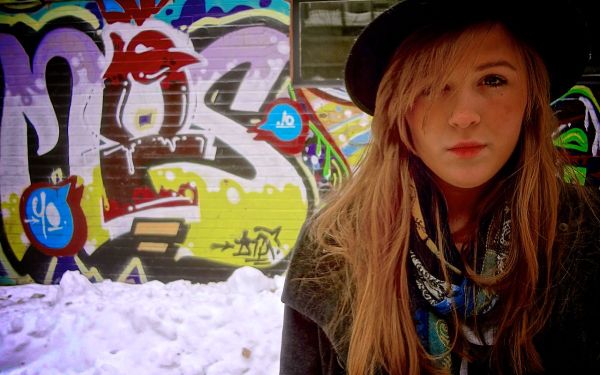 While a French person might think that this idiom has something to do with style or elegance (allure), the French Canadians are only trying to explain that whatever is happening is ridiculously crazy.

A: Martine decided that she would bike to work through ten feet of snow this morning.
B: Ben là, ça a pas d’allure son affaire!

There’s a simple explanation for this idiom not to be understood or used by the French: “bite,” a slang word for male genitalia, is hardly appropriate in a polite conversation.

I remember the day I heard my French Canadian colleague use this term for the very first time, I almost fell off my chair. Even though we were friends, she was my mother’s age and we had never discussed anybody’s intimate parts, so why on Earth did she decide to start, using that word? It took me a while to get it, but the relief (and the silent laughs) that ensued was priceless.

“Tiguidou” is simple, funny, and if you hang out with French Canadians long enough, you’ll hear it all the time. No need for a dictionary to decipher the adorable “tiguidou.”

However, if you think that “tiguidou” is proof enough you are bilingual in French Canadian, read the following and think again: “Tiguidou, l’affaire est ketchup.” The use of condiments has a lot of French slightly confused.

French Canadians used to be a fiercely Catholic bunch. Things have changed, but the swear words they use are just riddled with deformed Church lingo. “Mosus” (or “mausus”) is a variation (pretty far-fetched) of “maudit,” meaning cursed, and it’s not that obvious to anyone, even the French, that it implies somebody’s in a bad mood.

A: Have you talked to Simon lately? I have not heard from him in a while.
B: No, Y’est en mosus, he does not want to talk to me.

Nothing gets more French Canadian than saying “put on your toque” to express anticipation. “Tuque” is a word unknown to the French (the joy of temperate weather), but it’s an indispensable accessory for the frozen Quebecois.

I’m going to push that sled down the hill, attache ta tuque!

In French Canada, if you “have water in the cellar,” you’re not trying to alarm anyone about a possible flooding problem, but you probably grew a few inches, or hemmed your pants while drunk. In France, we say that we’re “going to harvest some mussels” (how charming!). Wherever you live, get yourself a new pair of jeans and fire the seamstress.

I should wear my black pants for my interview tomorrow. They’re classy.
Classy like you have some eau dans la cave.

If someone’s proving to be unpleasant, they are “malcommode.” Now, let’s just be happy that they are not “un esti d’cave” (a major asshole).

In France, “tanner” has one, and only one, meaning: to turn a hide into leather. In French Canada, however, “tanner” someone or to be “tanné” means you’ve had enough.

A: I feel like I’ll never be able to make myself clear in Quebec.
B: T’es tanné, hein? No worries, with a bit of practice, “l’affaire est ketchup.”
A: Oh Lord…

10. J’aime frencher mon chum! | I like kissing my boyfriend!

French Canadians are brave people. They are surrounded by English speakers, and yet they manage to keep their language and their traditions alive. Nonetheless, despite all their efforts, sometimes, English leaks in, and it’s pretty funny to witness.

“Frencher” is a half-French, half-English word that’s meaning is rather obvious for those who speak English. The French should know all about it (they invented the stuff after all), but we just don’t use this funny hybrid of a verb. “Chum” or “blonde” are very common ways to talk about your better half. Even if your girlfriend is a red head, just go call her “blonde” and try to blend in.

A: Where is your son?
B: He frenche sa blonde behind the house. He thinks I can’t see them.
A: Y’est niaiseux! (silly boy!)